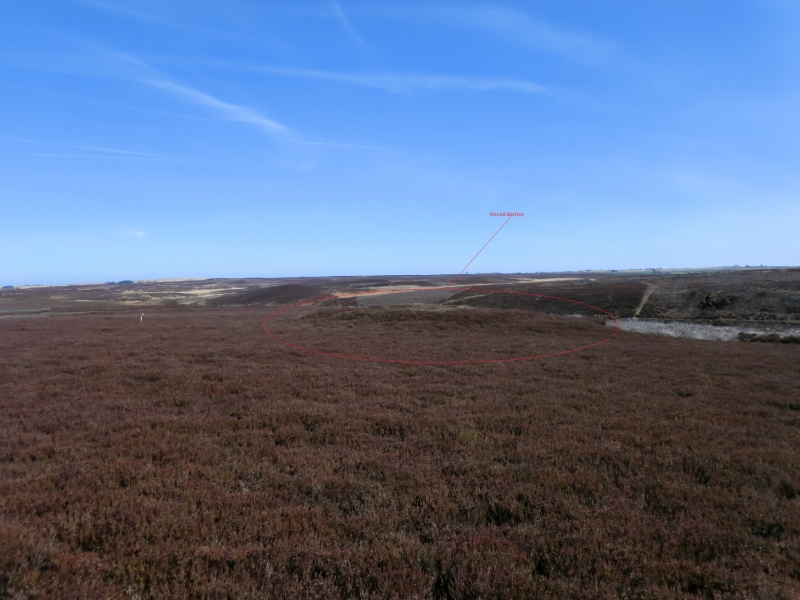 The monument includes the buried and earthwork remains of four round barrows
and a pit alignment on Middle Rigg, Easington High Moor.
The pit alignment was first noted by Young in 1817 who interpreted the remains
as an ancient British pit village. Canon Atkinson investigated one of the pits
in 1848 and found it to have a stone floor 1.2m-1.5m below the level of the
surrounding ground surface. In 1864 Atkinson returned to part excavate one of
the four round barrows. Elgee reinterpreted the pit alignments as an
unfinished cross dyke in 1930 and in 1993 the area was surveyed by the Royal
Commission on the Historic Monuments of England who identified it as the best
surviving example of a particular form of pit alignment, a segmented embanked
pit alignment. Three of the four round barrows form a roughly north west to
south east line on the part of Middle Rigg known as Three Howes Rigg. All
three barrows show signs of antiquarian excavation, but each has a significant
proportion of the original volume of the mound surviving undisturbed. The
north western barrow is just over 20m in diameter and stands 1.5m high. The
middle barrow is centred 45m to the ESE and is 17m in diameter and 2m high.
The third barrow is centred a further 50m to the south east, is also about 17m
in diameter and stands to 1.2m in height. The middle barrow has a north-south
trench cut through its centre. This is thought to have been dug in 1864 by
Atkinson, who found two cremation burials. The first was about 6m from the
centre of the mound and was associated with a small cup, fragments of other
pieces of pottery including those from a large Bronze Age urn and four worked
flints, one being an arrow head. Within 0.5m of the mound's centre there was a
second small cup with more cremated bone, worked flint and a 32mm long lump of
haematite.
The pit alignment on Middle Rigg runs approximately parallel to the line of
three barrows, about 120m to the north east. It is in two main sections,
slightly offset from each other, with the 23m gap between the two sections
lying opposite the central barrow. Each section of the pit alignment is
further subdivided into segments, with each segment typically having between
two and four pairs of pits flanked to the NNE and SSW by a pair of banks. Each
segment is divided from the next by a slight change in direction, or a small
break in the flanking banks. The two lines of paired pits are typically
centred 10m apart and are up to 3m in diameter with the banks 12m to 18m apart
and up to 1m high. The western section of the pit alignment is 138m long and
includes 34 pits arranged in four shorter segments. The eastern section is
115m long and has 30 pits divided between five segments.
The fourth round barrow is centered 60m to the south east of the south eastern
end of the pit alignment, with the line of the pit alignment forming a tangent
with the northern side of the barrow. This barrow is more complex in earthwork
form than the other three in the group. It is a 13m diameter squat mound
placed centrally on a circular platform which has an outer lip 0.1m to 0.2m
high. The base of the platform is 22m in diameter, with the lip 0.5m above the
surrounding ground surface. The whole barrow is sited on slightly sloping
ground so that it is 1m high when measured on the north western side and 1.6m
high on the south eastern side.
The four round barrows associated with the pit alignment on Middle Rigg have
no discernible ditches around them, but excavation of other barrows has shown
that even where no encircling depression is discernible on the modern ground
surface, ditches immediately around the outside of barrows frequently survive
as infilled features, containing additional archaeological deposits.

Excavation of other round barrows in the region has shown that they
demonstrate a very wide range of burial rites from simple scatters of cremated
material to coffin inhumations and cremations contained in urns, typically
dating to the Bronze Age. A common factor is that barrows were normally used
for more than one burial and that the primary burial was frequently located on
or below the original ground surface, often with secondary burials within the
body of the mound.
Pit alignments have been identified in many locations across the country,
normally as crop mark sites. They frequently extend for great distances and
are considered to have acted as territorial markers or boundaries. However the
pit alignment on Middle Rigg is of an unusual form, both in being embanked and
arranged in segments. Only three other similar sites are known, all within the
River Esk basin, with one just to the east of Bella Dale Slack on Black Dike
Moor. The pit alignments are also important because they survive as extant
earthworks, are of a rare form, and are associated with an important group of
round barrows.