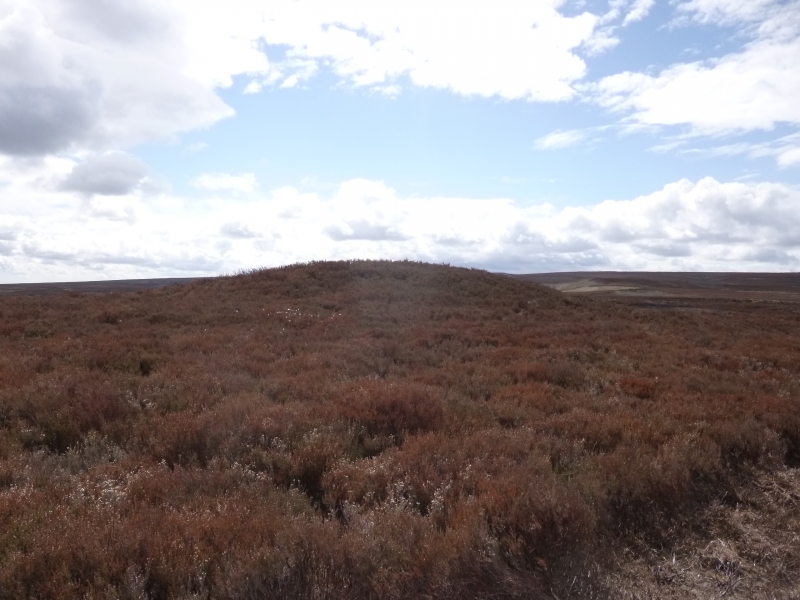 The monument includes three adjacent round barrows situated on a slight ridge.
The barrows are aligned south east to north west, with the barrow to the south
east offset by 20m to the south west. This most south easterly barrow is the
most prominent and has an earth and stone mound standing 1.5m high. It is
round in shape and 18m in diameter.
In the centre of the mound there is a hollow caused by the partial excavation
of the barrow in 1863 by J C Atkinson, which uncovered a cist burial. This was
found to consist of eight stone slabs in a hexagonal arrangment, set within a
platform of large stones and containing pieces of a cremation urn. The other
two barrows lie on slightly lower ground to the north west. Both have a well
defined flat-topped earthen mound and each was originally surrounded by a
ditch up to 3m wide which has become filled in over the years and is no longer
visible as an earthwork. The south eastern barrow stands 0.6m high and is 17m
in diameter. The north western barrow stands 0.4m high and is 20m in diameter.
Both the barrows are intact.
The barrows lie in an area rich in prehistoric monuments, including further
barrows, field systems and clearance cairns.

Despite limited disturbance to the south eastern barrow the three barrows 775m
south west of Clay Hall Farm survive well. Significant information about the
original form of the barrow and the burials placed within it will be
preserved. Evidence for earlier land use will also survive beneath the barrow
mound. Unlike many barrows in this area the other two within this group have
not been excavated and survive in a good state of preservation. The
archaeological deposits survive intact and evidence for the date and original
form of the barrows and the burials placed within them will be preserved.
Evidence for earlier land use will survive beneath the barrow mounds and
within the ditches.
Together with other barrows in the area, they are thought to represent a
territorial marker. Similar groups of monuments are also known across the west
and central areas of the North York Moors, providing important insight into
burial practice. Such groupings of monuments offer important scope for the
study of land division for social and ritual purposes in different
geographical areas during the prehistoric period.