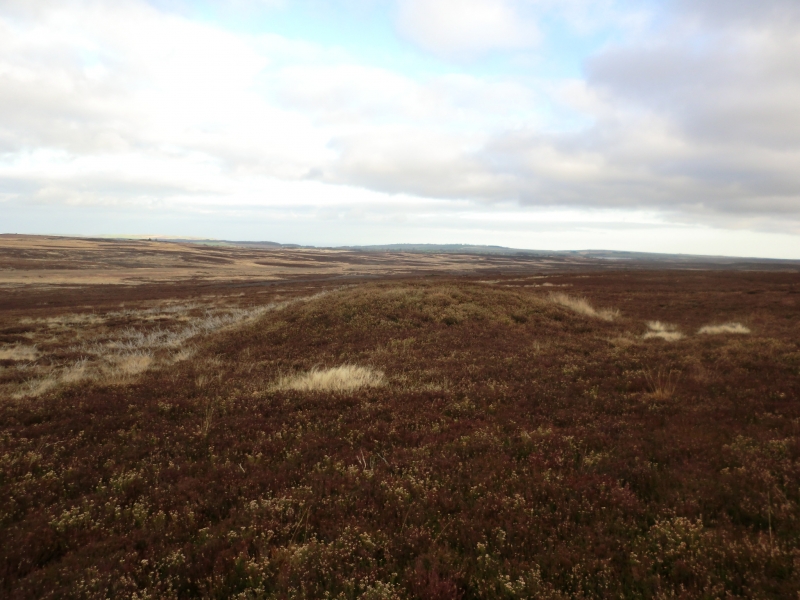 The monument includes the buried and earthwork remains of a prehistoric burial
mound on the western part of the ridge of moorland known as Elm Ledge. The
oval barrow is sited on gently sloping ground which slopes down from a ridge
180m to the south to a stream known as Sandy Slack 300m to the north. It is
not in a visually prominent location, but it does overlook the head of the
stream which lies 200m to the north west and is sited to provide a good view
down the valley to the north east. The mound's longest axis is 20m and
orientated approximately north east to south west, slightly across the line of
the slope, which slopes down to the NNE. It is oval in shape with a maximum
width of 10m, standing up to 1.5m high. On either side of the long axis of the
barrow there is a 10m wide level area with some indications of an infilled
ditch. On the south eastern side this is cut into the rising ground surface,
on the north western it is built up to form a slight terrace.

Oval barrows are funerary and ceremonial monuments of the Early to Middle
Neolithic periods, with the majority of dated monuments belonging to the later
part of the range. They were constructed as earthen or rubble mounds of
roughly elliptical plan, usually delimited by quarry ditches. These ditches
can vary from paired "banana-shaped" ditches flanking the mound to "U-shaped"
or unbroken oval ditches nearly or wholly encircling it. Along with the long
barrows, oval barrows represent the burial places of Britain's early farming
communities and, as such, are amongst the oldest field monuments surviving
visibly in the present landscape. Where investigated, oval barrows have
produced two distinct types of burial rite: communal burials of groups of
individuals, including adults and children, laid directly on the ground
surface before the barrow was built; and burials of one or two adults interred
in a grave pit centrally placed beneath the barrow mound. Certain sites
provide evidence for several phases of funerary monument preceding the barrow
and, consequently, it is probable that they may have acted as important ritual
sites for local communities over a considerable period of time. Similarly, as
the filling of the ditches around oval barrows often contains deliberately
placed deposits of pottery, flintwork and bone, periodic ceremonial activity
may have taken place at the barrow subsequent to its construction. Oval
barrows are very rare nationally, with less than 50 recorded examples in
England. As one of the few types of Neolithic structure to survive as
earthworks, and due to their rarity, their considerable age and their
longevity as a monument type, all oval barrows are considered to be nationally
important.

The vast majority of barrows on the North Yorkshire Moors are round barrows,
typically of later, Bronze Age, date and are normally sited in prominent
positions on skylines or ridges. The oval barrow on Elm Ledge is thus of
particular importance when compared to other barrows in the area. It is a well
preserved example, showing little sign of disturbance.