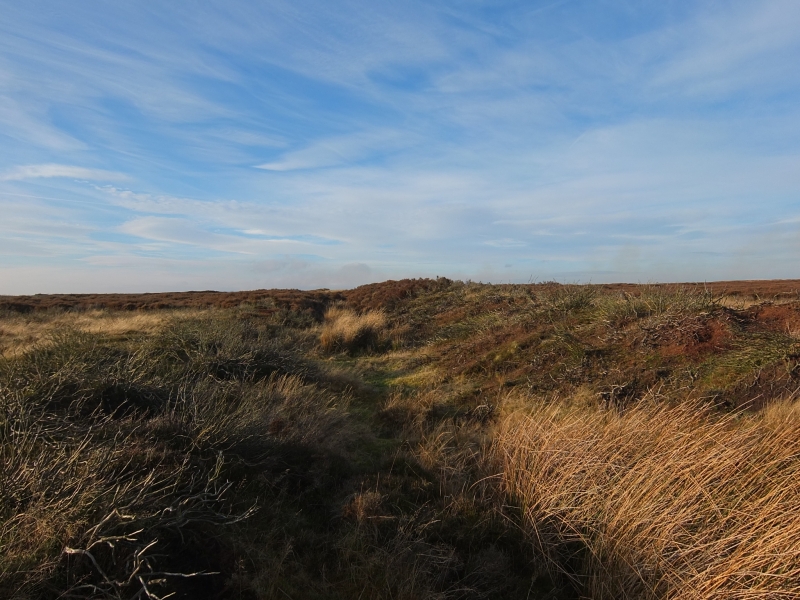 The monument includes a cross dyke which runs across a ridge on the north edge
of the North York Moors. It is 280m long and runs north west to south east
between two stream heads, defining a promontory on the ridge to the north. The
cross dyke has a ditch with a wide `V'-shaped profile which is up to 3m wide
and 1m deep. On the north side of the ditch there is a bank up to 4m wide and
0.7m high which was constructed from material excavated from the ditch. The
cross dyke lies in an area rich in prehistoric remains, particularly funerary
monuments.
There are four breaks in the cross dyke and numerous tank tracks in the base
of the ditch caused by military activity during World War II. Passing
through two of the breaks there are trackways running in a north to south
direction, one of which is a public bridleway. At the north west end, a ditch
has been cut through the cross dyke to divert water northwards from Gerrick
Spring.
The cross dyke lies in an area rich in prehistoric monuments, including round
barrows, field systems and clearance cairns.

Despite World War II military disturbance, the cross dyke on Gerrick Moor has
survived well. Important environmental evidence which can be used to date the
cross dyke and determine contemporary land use will be preserved within the
lowest ditch fills. Evidence for earlier land use will be preserved in the old
ground surface beneath the bank. The cross dyke is one of several in the north
part of the North York Moors which are associated with other prehistoric
monuments, including barrows and field systems, and are thought to represent
territorial boundaries. Similar groups of cross dykes are known in the west
and south east areas of the North York Moors. Such groupings offer important
scope for the study of land division for social, ritual and agricultural
purposes during the prehistoric period.