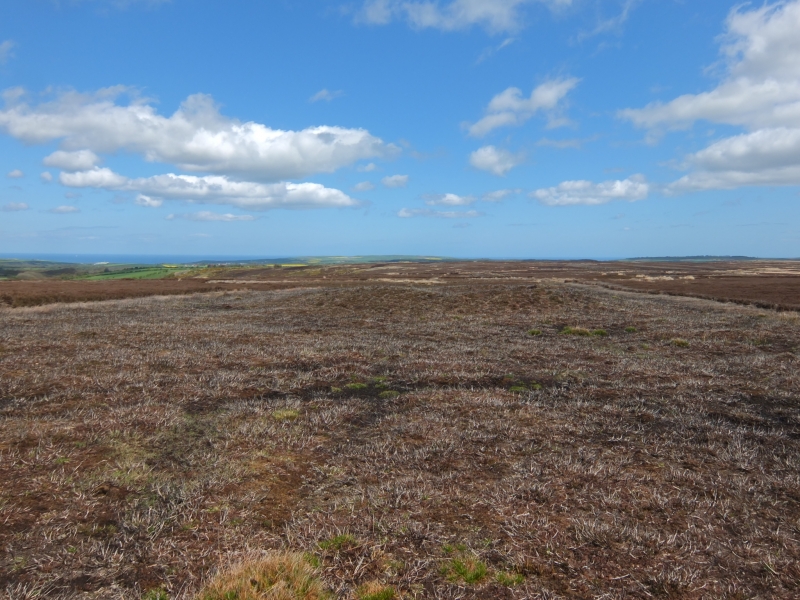 The monument includes the buried and earthwork remains of an oval enclosure
identified as a Bronze Age enclosed urnfield, flanked by a pair of prehistoric
burial mounds. The two barrows lie in line with the long axis of the
enclosure, and form part of a longer north east to south west alignment of
barrows on the hilltop. These barrows, which are the subjects of separate
schedulings, lie 165m to the south west, and 140m to the north east of the
centre of the enclosure. The barrows on Siss Cross Hill are also aligned with
a large and prominent barrow 770m to the north east on Gerrick Moor, part
of Robin Hood's Butts.
The enclosure is formed by a very regular and unbroken bank and external
ditch. The bank is typically 0.8m high and 3m wide, with the ditch up to 2m
wide and 0.3m deep. The whole enclosure measures 38m by 20m externally, and
30m by 10m internally. To the north east and north west of the enclosure, both
centred just under 50m from its centre, are two round barrows. The north
eastern barrow is 17m in diameter and stands up to 0.6m high with a 6m
diameter central depression which is considered to have been the result of
antiquarian excavation. The barrow to the south west is smaller, only 8m in
diameter and 0.2m high, but has no central depression and appears to be
relatively well-preserved.
The two barrows have no visible traces of surrounding ditches, although
excavation of other barrows has shown that even where no encircling depression
is discernible on the modern ground surface, ditches immediately around the
outside of barrows frequently survive as infilled features containing
additional archaeological deposits.

The oval enclosure on the summit of Siss Cross Hill is considered to be an
enclosed Bronze Age urnfield. These are burial grounds in which cremations,
usually placed in cinerary urns, were interred within an enclosure up to 30m
across. The enclosures were formed by either a bank, a ditch or a bank within
a stone circle, normally, but not always with an entrance or causeway to
provide access. Sometimes the enclosure also contains a standing stone or
central mound. Excavated examples are known to date to the Middle Bronze Age
between the 16th and 11th centuries BC. They are largely found in the north of
England, mainly in Yorkshire, Cumbria and Northumberland, extending into
Scotland. They are a rare form of Bronze Age burial monument, with fewer than
50 identified examples, and provide an important insight into beliefs and
social organisation during this period. All positively identified examples are
considered to be nationally important.
Excavation of round barrows in the region has shown that they demonstrate a
very wide range of burial rites from simple scatters of cremated material to
coffin inhumations and cremations contained in urns, typically dating to the
Bronze Age. A common factor is that barrows were normally used for more than
one burial and that the primary burial was frequently located on or below the
original ground surface, often with secondary burials within the body of the
mound. Most barrows include a small number of grave goods. These are often
small pottery food vessels, but stone, bone, jet and bronze items have also
occasionally been found.
Despite limited disturbance, the enclosure is in a good state of preservation.
Significant information about the date and form of construction will be
preserved. Important evidence for the nature and duration of the rituals
involved in its use will survive in the interior of the enclosure. Evidence
for earlier land use and the contemporary environment will also survive
beneath the banks and within the buried ditch.
This monument is one of only four or five similar embanked oval enclosures on
the North York Moors which are interpreted as a regionally distinct form of
urnfield. They share characteristics in common with funerary and ritual
monuments of both Late Neolithic and Bronze Age date and as such will contain
important information to aid our understanding of the development and
complexity of funerary and ritual practice during these periods. With its
flanking barrows the enclosure is part of an important group of Bronze Age
funerary monuments.