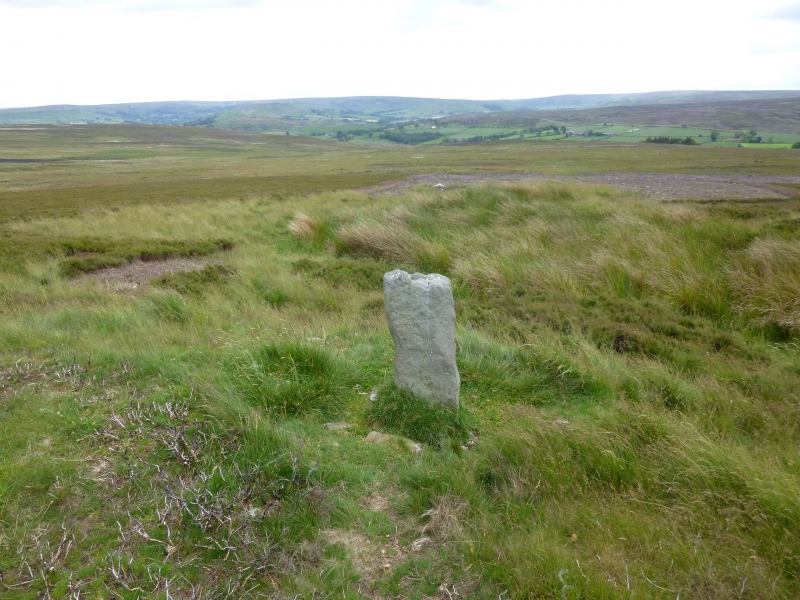 The monument includes the buried and earthwork remains of a prehistoric burial
mound with an associated enclosure and small standing stone, located on the
southern flanks of Brown Hill.
The monument is sited on ground that rises gently to the NNE. The small
standing stone is at the monument's centre with the round cairn to the north
east and the enclosure to the south west. The enclosure is formed as a level
area terraced into the rising ground downslope from the standing stone.
The area is defined on the north eastern side by a 5m wide, 1m high scarp
extending from the base of the standing stone and on the remaining sides by a
low curving bank up to 1m wide and 0.1m high. The enclosed level area is
roughly `D'-shaped, 16m across measured along the foot of the scarp, and 11m
wide at its widest point so that the furthest distance between the bank and
the standing stone is 16m. The standing stone measures 0.35m by 0.12m and
stands 0.9m above the surrounding ground surface. It is orientated so that its
largest faces are directed towards north and south respectively and its base
is secured by a number of small packing stones. The round cairn is centred 8m
to the north east of the standing stone. It is a 13m diameter mound standing
up to 0.3m high with a slightly dished top. There is no ditch visible
surrounding the cairn, although excavation of other cairns has shown that even
where no encircling depression is discernible on the modern ground surface,
ditches immediately around the outside of cairns frequently survive as
infilled features, containing additional archaeological deposits.

Excavation of other round cairns in the region has shown that they demonstrate
a very wide range of burial rites from simple scatters of cremated material to
coffin inhumations and cremations contained in urns, typically dating to the
Bronze Age. A common factor is that they were normally used for more than one
burial and that the primary burial was frequently located on or below the
original ground surface, often with secondary burials within the body of the
mound. Most include a small number of grave goods. These are often small
pottery food vessels, but stone, bone, jet and bronze items have also
occasionally been found.
Standing stones are prehistoric ritual or ceremonial monuments with dates
ranging from the Late Neolithic to the end of the Bronze Age for the few
excavated examples. They comprise single or paired upright orthostatic slabs,
ranging from under 1m to over 6m in height when still erect. They are often
conspicuously sited and close to other types of monument. They can be
accompanied by various features: many occur in or on the edge of round
cairns, as in this case, and where excavated, associated sub-surface features
have included stone cists, stone settings and various pits filled with earth
containing human bone, cremations, flints and pottery. Similar deposits have
been found in the excavated sockets of standing stones which range
considerably in depth. Standing stones have functioned as markers for
routeways, territories, graves, or meeting points, but their accompanying
features show that they also had a ritual function. No national survey of
standing stones has been undertaken, and estimates range from 50 to 250 extant
examples, widely distributed throughout England but with concentrations in
Cornwall, the North Yorkshire Moors, Cumbria, Derbyshire and the Cotswolds.
Standing stones are important as nationally rare monuments with a high
longevity of use, which demonstrate the diversity of ritual practices in the
Late Neolithic and Bronze Ages. Consequently all undisturbed standing stones
and those that represent the main range of types and locations are considered
to be of national importance.
The monument is an example of one of the more complex funerary monuments
constructed during the Bronze Age. The arrangement of a small`D'-shaped
enclosure and a round cairn either side of a standing stone at this site is
extremely unusual, and information on the exact relationships of these
features will be preserved.