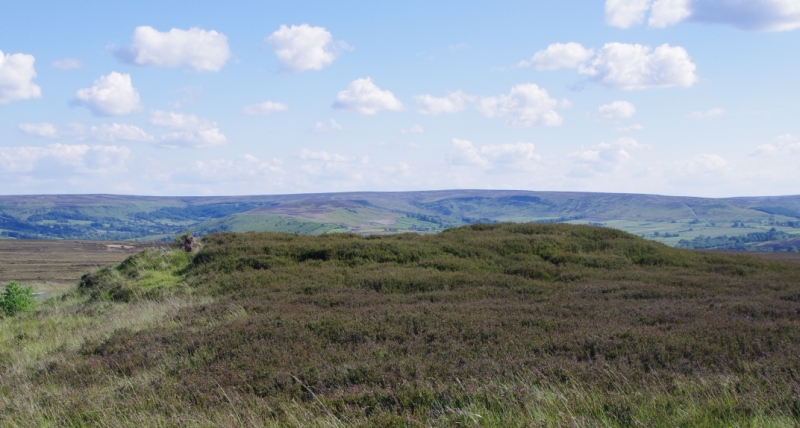 The monument includes the buried and earthwork remains of the southernmost
pair of a line of five prehistoric burial mounds, the other three of which are
the subject of separate schedulings. The five barrows are all located on the
top of the broad ridge which forms the Rigg to the south of White Cross. The
northernmost barrow and the southern pair lie in an approximate north-south
line with the remaining two barrows sited 25m-30m to the east of this line.
The two round barrows 560m SSE of White Cross are centred 40m apart and lie
just west of the road to Castleton from White Cross. The northern barrow is
18m in diameter and 1.7m high with a slightly dished top so that the centre is
0.4m below the highest point. The southern barrow is 17m in diameter sited on
slightly sloping ground so that it is 0.5m high on the northern side, 1.5m
high on the southern side. It is surrounded by a 6m wide platform defined by a
break of slope on the southern and western sides and by a slight ditch on the
northern side. The eastern side, along with 1m-2m of the eastern edge of the
barrow has been cut by the road. The surrounding platform is included in the
scheduling. The top of the barrow has an irregular depression up to 0.6m deep
with a small upright stone on its eastern lip. This stone is 0.35m by 0.1m
with 0.8m exposed above the ground. The stone is orientated so that the larger
faces point roughly east and west, with the west face slightly southwards. The
stone is inscribed in three places, each to different depths and weathered to
different degrees, implying the inscriptions are of different dates. The
earliest inscription is at the top of the west face. This is a design showing
a shape like a downward pointing single spiked spur which encloses a plain
vertical cross within the U of the spur, with a dot in the top right quadrant
of the cross. Both the upper parts of the U and the cross are truncated by the
loss of the upper part of the stone. Towards the top of the east face there is
a deeply and roughly inscribed date of 1882, and below this is a neatly
chiselled bench mark.
Excavations of other barrows have shown that shallow ditches immediately
encircling the mounds are common, normally surviving as infilled features
rather than as earthworks.

Excavations of round barrows in the region have shown that they demonstrate a
very wide range of burial rites from simple scatters of cremated material to
coffin inhumations and cremations contained in urns, typically dating to the
Bronze Age. A common factor is that barrows were normally used for more than
one burial and that the primary burial was frequently on or below the original
ground surface, often with secondary burials located within the body of the
mound. Most barrows include a small number of grave goods. These are often
small pottery food vessels, but stone, bone, jet and bronze items have also
occasionally been found.
The two barrows 560m SSE of White Cross on Three Howes Rigg are part of an
important group of barrows. They are both relatively well preserved and form a
local landmark. The southern barrow with its surrounding platform and
inscribed stone is especially unusual and thus has added importance.