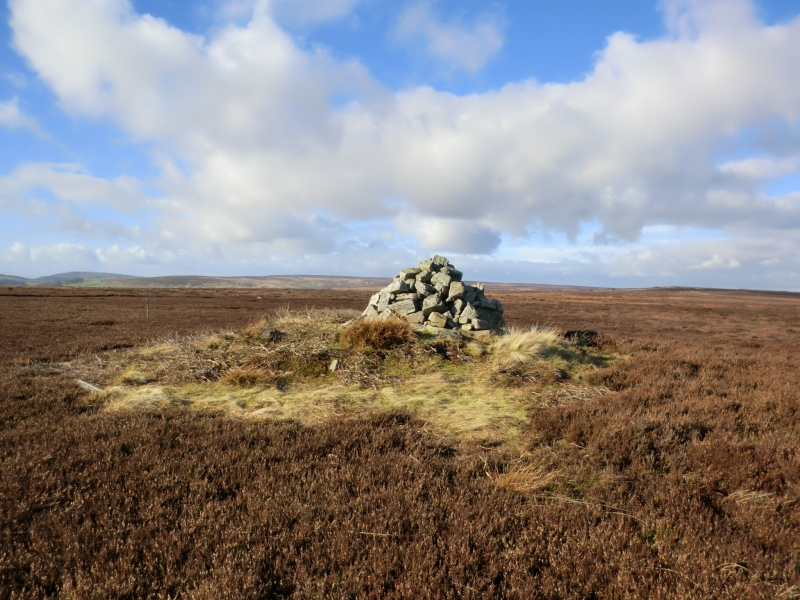 The monument includes the buried and earthwork remains of a prehistoric burial
mound sited at the southern end of Three Howes Rigg, 1.4km north of Castleton.
A group of five burial mounds forming a round barrow cemetery centred higher
up on the Rigg, 1km to the NNW, is the subject of a separate scheduling.
Pike Howe round barrow survives as a 9m diameter stone and earth mound,
standing up to 0.5m high topped by a modern cairn of stones. It is surrounded
by a largely infilled ditch 4m-5m wide with a slight, 1m wide external kerbing
of earthfast stones, some exposed, most under a thin peat covering. The
barrow is sited on level ground just north of the top of the scarp above the
River Esk, at the southern end of Three Howes Rigg. It is clearly intervisible
with the round barrow cemetery to the north, but is behind the skyline when
climbing up the hill from the River Esk.

Pike Howe is a good example of the smaller type of round barrow found on the
moors. Excavations of round barrows in the region have shown that they
demonstrate a very wide range of burial rites from simple scatters of cremated
material to coffin inhumations and cremations contained in urns, typically
dating to the Bronze Age. A common factor is that barrows were normally used
for more than one burial and that the primary burial was frequently on or
below the original ground surface, often with secondary burials located within
the body of the mound. Most barrows include a small number of grave goods.
These are often small pottery food vessels, but stone, bone, jet and bronze
items have also occasionally been found. Shallow ditches and/or stone kerbs
immediately encircling the mounds are also quite common. These are normally
identified by excavation; Pike Howe is thus of particular note.