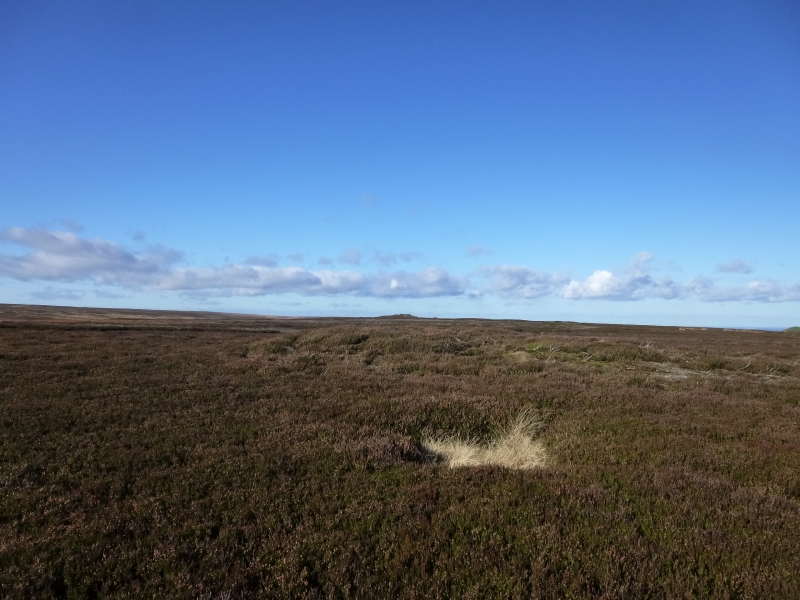 The monument includes the buried and earthwork remains of a prehistoric burial
mound located on the ridge just down hill of the summit of Haw Rigg. A pair of
barrows located on the summit of Haw Rigg, 210m to the north west, are the
subject of a separate scheduling.
One of four barrows on Haw Rigg is recorded as being extensively excavated by
Canon John Atkinson in 1861 or 1862. It was described as being somewhat less
than 55 yards in diameter (thus a maximum of 16m in diameter) and at least
seven feet high (over 2m). It was constructed as a cairn of stones nine feet
high built over a `card-house' of flat slabs built in a hole twelve feet
(3.65m) in diameter.
Over this internal cairn was piled stony earth containing four small cists,
boxes formed with stone slabs, containing cremated bone and charcoal. On the
south side of the barrow, near to the upper surface, was a pottery urn, also
filled with cremated bone and charcoal, with fragments of a second urn found
elsewhere within the mound.
The monument is a round barrow constructed of earth and stone, 12m in diameter
and 0.6m high, also with a slightly dished top. It is located on level ground,
slightly uphill from a break of slope. Early Ordnance Survey maps mark a
closely spaced pair of small mounds 50m to the ENE. These are recorded to have
disappeared by 1962 and are considered to have been the remains of the barrow
excavated by Canon Atkinson. They are not included in the scheduling.
Excavation of other barrows has shown that even where no encircling depression
is discernible on the modern ground surface, ditches immediately around the
outside of barrows frequently survive as infilled features, containing
additional archaeological deposits.

The survival of excavation records by Canon Atkinson of an associated round
barrow adds to the importance of the round barrow 550m south east of Job
Cross, as does the earthwork survival of the pair of barrows to the north
west. Excavation of other round barrows in the region have shown that they
demonstrate a very wide range of burial rites from simple scatters of cremated
material to coffin inhumations and cremations contained in urns, typically
dating to the Bronze Age. A common factor is that barrows were normally used
for more than one burial and that the primary burial was frequently on or
below the original ground surface, often with secondary burials located within
the body of the mound. Most barrows include a small number of grave goods.
These are often small pottery food vessels, but stone, bone, jet and bronze
items have also occasionally been found.