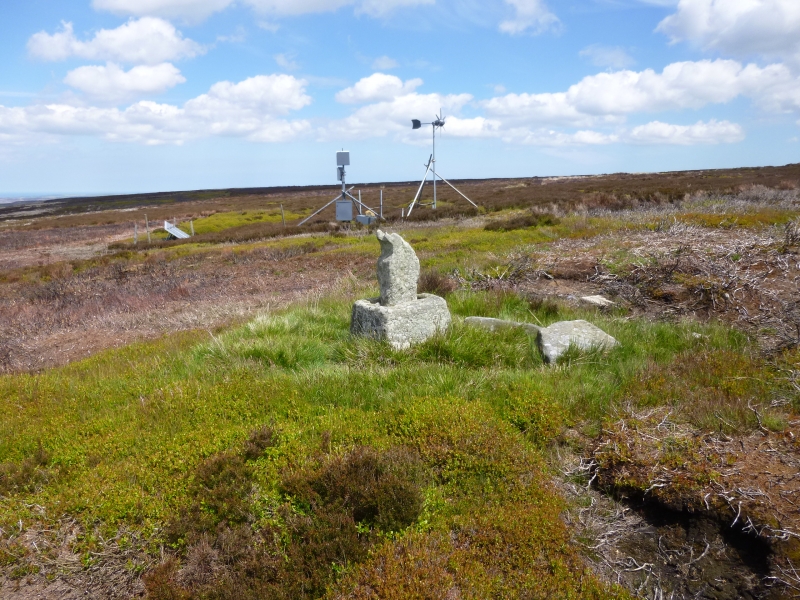 The monument includes a wayside cross known as Botton Cross on Danby High
Moor. It stands by the course of an old road which runs from the junction at
the cross called Young Ralph and heads south east towards Fryup Head and
Rosedale. The cross called Fat Betty is also on this route.

The cross is of an early medieval wheelhead type and survives as a base with
the top part of the shaft inserted into the socket hole and a lower portion of
the shaft lying on the ground beside it. The base is a gritstone block,
slightly tapered towards the top, measuring 0.58m by 0.57m at the ground and
narrowing to 0.48m by 0.47m at the top. The base is 0.51m high. The socket was
cut to take a stone shaft 0.34m by 0.21m . The stone in this socket is 0.24m
by 0.17m by 0.68m and is shaped at the top with shoulders to splay out into a
wheelhead but the head is missing.

Beside the cross, on the east side is a portion of dressed stone measuring
0.33m by 0.23m and 0.64m long. The stone is of the same type of local grit and
is cut to the same profile as the shaft and probably forms part of its lower
half.

The recumbent stone is included in the scheduling of this monument.

Botton Cross wayside cross survives well in spite of the loss of the wheelhead
and the break in the shaft. Enough remains to identify it as an early medieval
wheelhead cross of which Fat Betty is the only other known example in the
region. This cross serves to remind us of the medieval religious presence in
the landscape and the roadways that used to cross the moors to bring commerce
to the region.