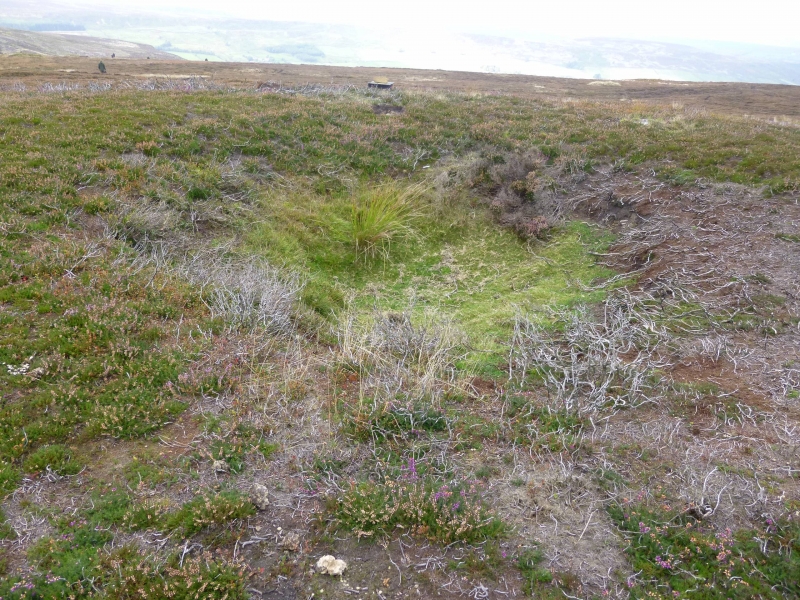 The monument includes the buried and earthwork remains of a prehistoric burial
mound sited on a saddle over Danby Rigg between Raven Hill to the east and the
village of Botton to the west.
Wolf Pit survives as a quite steep sided, 35m diameter mound with a 10m
diameter flat top. The barrow is sited on slightly sloping ground, sloping
down to the north and west so that it is 1m high on the north side, but over
2m high on the southern and western sides. On the north western quadrant of
the top of the barrow there is a 7m diameter, 1.5m deep hollow which is
believed to have inspired the name of Wolf Pit. The base of the eastern side
of the barrow, next to the road, has been eroded by a trackway and other
roadside disturbance, revealing that the barrow is peat covered, and of a
mainly earthen construction with some stone.
Excavation of other barrows has shown that even where no encircling depression
is discernible on the modern ground surface, ditches immediately around the
outside of barrows frequently survive as infilled features, containing
additional archaeological deposits.

Wolf Pit is a good example of the larger type of round barrow found in
prominent locations on the moors. Excavations of round barrows in the region
have shown that they demonstrate a very wide range of burial rites from simple
scatters of cremated material to coffin inhumations and cremations contained
in urns, typically dating to the Bronze Age. A common factor is that barrows
were normally used for more than one burial and that the primary burial was
frequently on or below the original ground surface, normally with secondary
burials located within the body of the mound, which tend to survive
undisturbed even if the barrow has been investigated by 19th century
antiquarians. Most barrows include a small number of grave goods. These are
often small pottery food vessels, but stone, bone, jet and bronze items have
also occasionally been found.