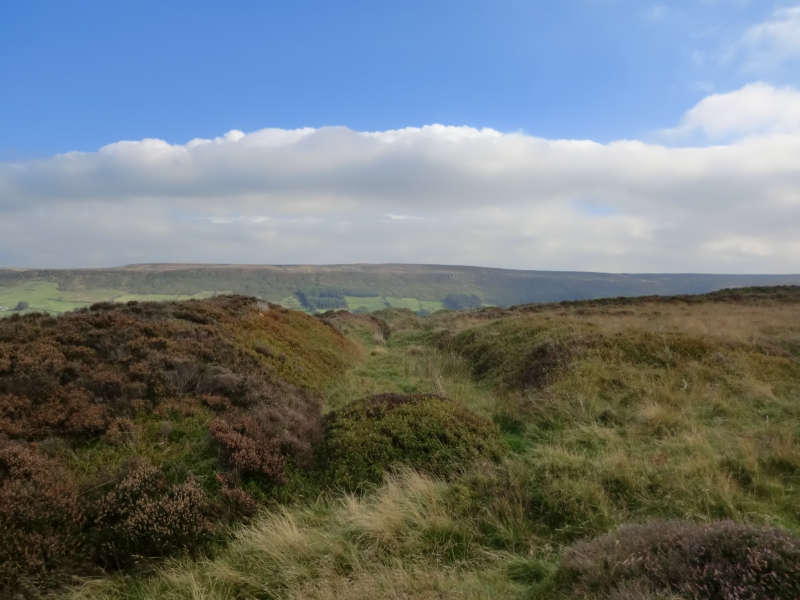 The monument includes the buried and earthwork remains of a prehistoric
boundary, a cross dyke, which runs across the spine of Castleton Rigg. It is
in two areas of protection. A second cross dyke, High Stone Dike which is the
subject of a separate scheduling, lies 750m to the south. The cross dyke is
just uphill and south of the lowest point of a saddle across the rigg, and is
sited on sloping ground.

The dyke is formed by a bank and ditch which runs in a broadly straight line
ESE to WNW with a slight curve to point due west at its western end. The bank
is not symmetrical in cross section, but is steeper on the side facing the
ditch which lies on the uphill, southern side of the bank. The eastern end of
the dyke has been truncated by a quarry and cut through by the road which runs
up the spine of the rigg. The section of dyke that survives to the east of the
road is 9m long. It has a 5m wide bank which stands 1m above the base of a 2m
wide, 0.8m deep ditch. To the west of the road the dyke continues, cut through
in places by old trackways until about 15m west of the road which runs down
into Westerdale. Here there is an approximately 20m wide gap in the bank and
ditch which is considered to be an original feature. This area, including the
part under the road, is considered to be archaeologically sensitive and is
thus included in the scheduling. Beyond the road the bank and ditch resumes as
a bank typically 5m-6m wide standing 1.3m above the base of a 4m wide, 1m deep
ditch. At its western end, where the dyke curves westwards, the bank and ditch
fade out into a slight terrace in the hillside which in turn fades out.

Excluded from the scheduling is the surface of the road that runs across the
western part of the dyke, although the ground beneath is included.

The northern of the two cross dykes on Castleton Rigg is a relatively well
preserved earthwork example of a Bronze Age boundary feature. The bank will
overlie and preserve prehistoric soil layers and the ditch will contain a
series of infilled sediments which will provide valuable information about the
local environment in the Bronze Age. Its importance is enhanced by survival of
a second cross dyke, High Stone Dike, 750m to the south.