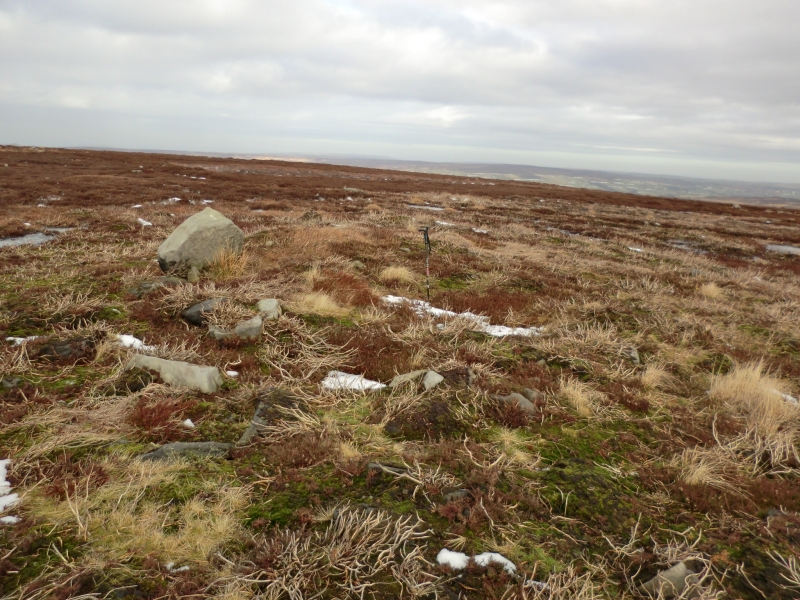 The monument includes the buried and earthwork remains of a prehistoric burial
mound located on the south side of a plateau forming the summit of Danby Rigg.
A second barrow, also called Pind Howe, lies on the north side of this
plateau, 180m to the NNW. A third larger barrow known as Wolf Pit lies on a
saddle across the Rigg, 650m to the south. These barrows are the subject of
separate schedulings.
The barrow is intervisible with both Wolf Pit and the northern Pind Howe, with
the two Pind Howes sited on top of the north-south orientated ridge, marking
the northern and southern sides of the summit of the rigg. The southern Pind
Howe is not as high as its northern neighbour, standing to 0.5m, but is more
complex and covers a larger area. It is 10m in diameter and incorporates a
large upright stone 3m north west of the centre of the mound. This stone is at
least 1m long and 0.4m thick and leans towards the centre of the mound
standing 0.6m above the surviving top of the mound. On the western edge of the
mound there are a pair of exposed kerb stones 0.5m to 0.8m across, with
further concealed stones detected around the rest of the mound. Encircling the
mound there is a largely infilled 3m wide ditch, defined on the outer margin
by an intermittent kerbing of more stones, in a 9m radius circle around the
centre of the mound. Three stones are exposed on the western side, with
further stones covered by a thin layer of peat around the rest of the circuit.

The Southern Pind Howe round barrow is a good example of the type typically
found on the North Yorkshire Moors. Excavations of round barrows in the region
have shown that they demonstrate a very wide range of burial rites from simple
scatters of cremated material to coffin inhumations and cremations contained
in urns, typically dating to the Bronze Age. A common factor is that barrows
were normally used for more than one burial and that the primary burial was
frequently on or below the original ground surface, often with secondary
burials located within the body of the mound. Most barrows include a small
number of grave goods. These are often small pottery food vessels, but stone,
bone, jet and bronze items have also occasionally been found. Shallow ditches
and/or stone kerbs immediately encircling the mounds are also quite common,
although rarely identifiable without excavation. The southern Pind Howe is
therefore especially important.