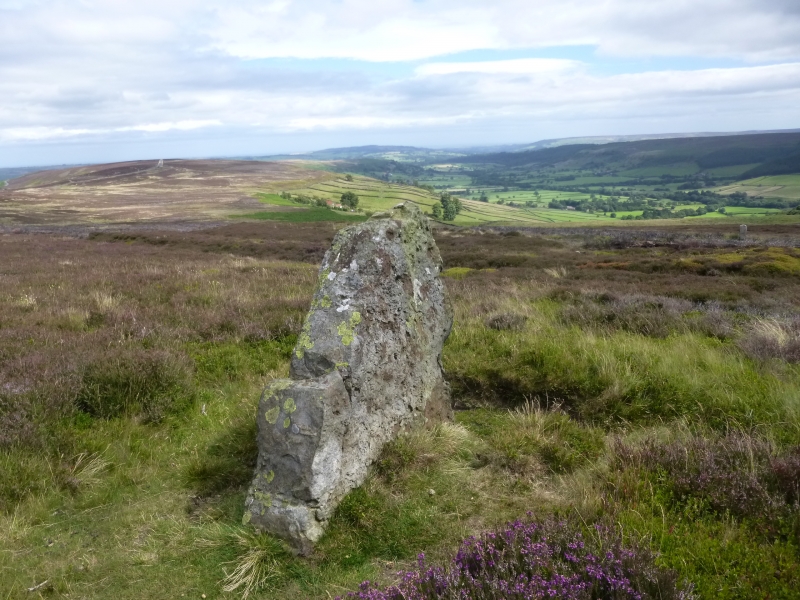 The monument includes the buried and earthwork remains of a prehistoric
boundary, a cross dyke, which runs across the spine of the south western part
of Glaisdale Rigg. It is in two areas of protection. A second cross dyke,
known as Hart Leap which is the subject of a separate scheduling, lies to the
north east.
The cross dyke can be seen as a boundary running over the rigg separating it
from Glaisdale Moor. It runs WNW to ESE across the spine of the rigg as a low
bank of varying form with a continuous ditch on its southern side and, along
one section, a matching ditch on its northern side. The cross dyke survives in
two sections either side of the road which runs along the top of the rigg. The
ground on the western side of the road slopes downwards at a fairly constant
rate to the WNW until just past a drystone wall where it falls away more
rapidly into Great Fryup Dale. For the first 40m to the west of the road, the
dyke is formed by a low broad bank between two broad ditches, both about 0.4m
deep, giving the dyke a symmetrical cross section. The bases of the ditches
are 9m apart and the whole dyke is around 18m wide. There is then a 20m wide
break which is considered to be an original causeway through the dyke. After
this break the double ditches can be traced for about a further 55m down hill,
with the central bank continuing as an intermittent feature. The slope then
increases slightly, the northern ditch fades out and the bank becomes more
pronounced. Here the bank is typically 0.4m high with a steeper southern face
immediately adjacent to the 0.2m deep ditch, the whole dyke being around 9m
wide. After just over 100m the dyke fades out about 50m from the drystone wall
which marks the boundary of the unenclosed moorland. It is thought that the
dyke originally extended to the scarp just beyond this wall.
On the eastern side of the road the land slopes down eastwards into Glaisdale,
initially quite steeply, then levels out before dropping away again beyond the
drystone wall forming the boundary of the moorland. Adjacent to the road there
is a broad area of deeply cut parallel trackways, through which there is no
trace of the cross dyke. Beyond these tracks there is still no evidence of the
cross dyke until the ground starts to level out. There is then a 40m long
section of dyke about 11m wide formed by a broad bank 8m wide and 1m high with
a ditch to the south which is cut into rising ground. This section of dyke is
on a slightly different alignment to the rest, running more east-west. The
western end is considered to be an original feature, ending where there is a
change of slope. However the eastern end has been removed in an area of
shallow workings for iron ore.

The cross dyke 520m and 250m west of Highdale Farm over Glaisdale Rigg is a
relatively well preserved earthwork example of a Bronze Age boundary feature.
The bank will overlie and preserve prehistoric soil layers and the ditch will
contain a series of infilled sediments which will provide valuable information
about the local environment in the Bronze Age. The 40m long section of ditch
on the eastern side of the road is of especial importance because the poorer
drainage of this area will preserve a wider range of material which will
provide additional environmental information. The importance of the cross dyke
is enhanced by survival of a second cross dyke, known as Hart Leap, to the
north east.