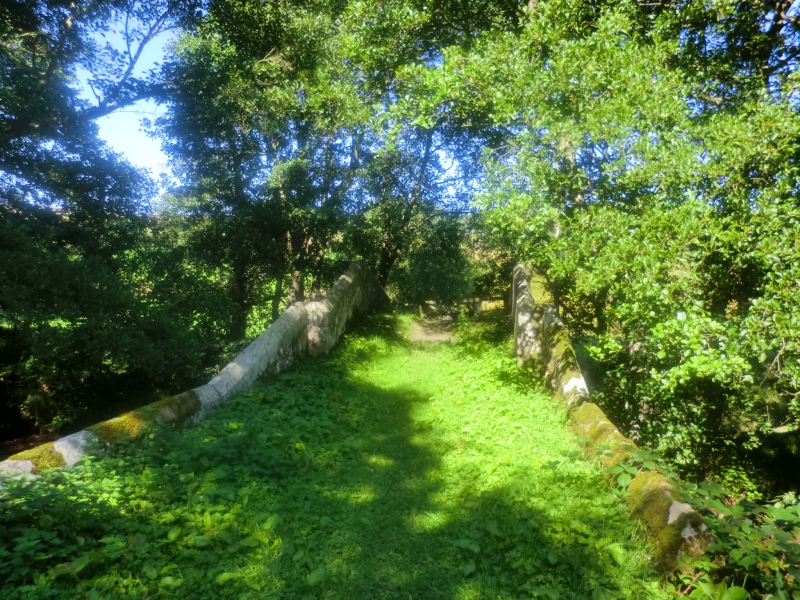 The monument includes a single arched bridge over the River Esk, just
beyond the northern end of the village of Westerdale.

Hunter's Sty Bridge is thought to date from the late 13th century and to
have been built to provide access to the Royal Forest of Pickering;
`hunter's sty' meaning `hunter's steep path.' It was restored in 1874 by
Octavius Duncombe, son of the first Baron Feversham.

The single arch is segmental with a span of nearly 6m and has a double
arch ring, the outer ring extending outwards as a moulded drip course. The
arch is supported by four ribs that spring from ribbed abutments. The
deck, which is nearly 3m wide, is slabbed, the stones being supported
directly on the arch ribs below. The outer faces of the abutments have the
appearance of being encased in later stonework, finished as rock faced
ashlar, possibly dating to the 1874 restoration. The parapets over the
arch, and the capping of the parapets above the abutments are also built
in ashlar, but of a smoother, pockmarked finish. On the outer faces of the
parapets, above the crown of the arch, there are two carved panels. The
one facing upstream, eastwards, carries the crest of the Duncombe family,
the downstream panel having a raised inscription: "This ancient Bridge was
restored by Colonel the Honorable O.Duncombe A.D.1874."

Hunter's Sty Bridge is a good example of a ribbed medieval bridge, and
despite 19th century restoration, will retain important evidence of the
original medieval construction.