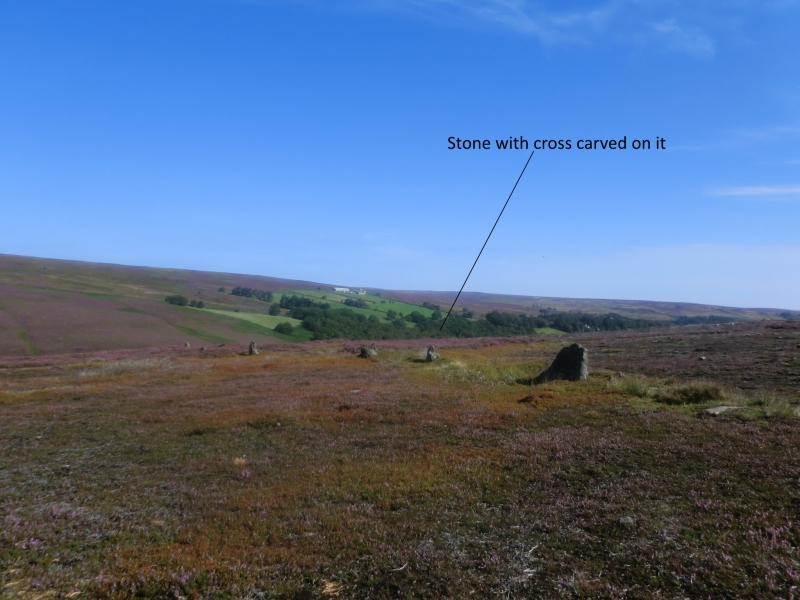 The monument includes extensive buried and earthwork prehistoric farming
remains, occupying an eastwards pointing spur or Rigg of moorland which
separates Westerdale from Baysdale. It was first noted by the antiquarian
G Young in 1817. The area was first surveyed by the Ordnance Survey and then
in more detail by J Davies in the 1920s, with the plan being reproduced in F
Elgee's book 'Early Man in NE Yorkshire' in 1930.
The monument includes a range of components which are considered to represent
activity between the Bronze Age and late Iron Age. The western end of the
monument is defined by a cross ridge dyke. Extending eastwards from this there
is a cairnfield including over 100 cairns, at least two of which are thought
to be small burial mounds. At the eastern end of the cairnfield there is a
more regular field system defined by low stony banks which includes a scatter
of hut circles and a small square enclosure formed by a substantial stone
bank. The cross dyke and cairnfield are considered to have originated in the
Bronze Age, whereas the square enclosure, which is interpreted as an enclosed
settlement site and includes iron slag in its bank, is thought to be Iron Age
in date.
The cross dyke includes a 70m long alignment of upright stone slabs running
north-south on the northern side of the rigg. Along the east side of the
southern half of the stone alignment there is a shallow ditch typically 1.5m
wide and 0.5m deep with a bank beyond up to 2m wide and 0.4m to 0.8m high. The
stone alignment lines up with a lone standing stone 130m to the south,
suggesting an original intention to continue the dyke to the southern side of
the rigg.
To the east of the cross dyke, scattered along the top of the rigg, there is a
cairnfield of small irregular stony cairns typically up to 0.4m high and
around 4m in diameter. The cairnfield extends about 800m to the NNE from the
standing stone, the main concentration of cairns starting 150m east of the
dyke, the scatter of cairns broadening eastwards from 150m to just over 300m
wide. The overall distribution of the cairns is fairly random, although there
are a number which form intermittent lines. Some cairns merge into low sinuous
banks, whereas a handful are more regular in form and are identified as small
round cairns. One of these, sited on the centre of the ridge, is 6m in
diameter and 0.6m high surrounded by a 2m wide ditch up to 0.2m deep. A
second, similar in size but without an obvious ditch, is on the north side of
the summit of Crown End.
Two trackways, marked by linear hollows, run up the north and south sides of
the rigg and into the cairnfield. These are thought to be contemporary with
the cairnfield, providing access to the water courses and the lower lying land
in the adjacent dales, and thus sample lengths of these trackways are included
in the monument.
The eastern 50m of the cairnfield lies inside the field system defined by low
stony banks. This covers an area approximately 250m east-west and extends just
over 350m down the north facing slope. The most prominent boundaries are all
shown on Ordnance Survey maps and are low stony banks typically 3m wide and
0.3m high. Those running east-west across the hillside are more pronounced as
they also form lynchets. There are a number of other boundaries which are
included in the monument, but are not marked by the Ordnance Survey. These are
typically narrower banks, with some being a single line of large stones, and
they lie mainly in the north western and south eastern parts of the field
system. Those boundaries to the south east extend about 80m into the spread of
surface stone litter that covers much of the eastern slopes of the rigg. The
fields defined by the banks are generally rectangular, ranging between 150m
and less than 30m across, but they have sinuous boundaries and include the
occasional small irregular enclosure. Scattered across these fields there are
at least ten hut circles typically formed by a circular bank 0.4m high and 6m
in diameter. These are the remains of prehistoric buildings forming a small
unenclosed settlement. Two sets of hollow ways, one to the north and one to
the north east, run up the hillside into the field system. Again these are
thought to be contemporary features and sample lengths are thus included in
the monument.
In the eastern part of the field system there is a square enclosure with well-
rounded corners. It is 40m across and formed by substantial stony banks 3m-4m
wide and 1.2m to 1.5m high, with evidence that the internal face was partly
formed with large upright stones. This enclosure, which is interpreted as an
enclosed settlement site, has a narrow entrance through its western bank near
the south western corner, with a possible second entrance on the opposite
side. The interior is slightly uneven and will include archaeological remains
of additional structures. At the centre of the enclosure there is a shallow
square hollow just over 2m across with an adjacent small cairn of spoil. This
is identified as an excavation trench dug by Canon Atkinson in the 1870s. The
banks include small quantities of iron slag which have been identified as Iron
Age bloomery waste. The buried remains of one or more bloomeries, small
furnaces for smelting iron, will survive in the area of the square enclosure
and are included in the scheduling.
The fencing around the plastic lined watering hole to the south east of the
square enclosure, along with the plastic lining itself are excluded from the
monument, although the ground beneath is included.

The North York Moors is an area which has an abundance of prehistoric remains,
particularly within moorland landscapes where they have not been disturbed by
more recent agricultural activity. These provide evidence for the widespread
exploitation of the area throughout prehistory. Many remains date from the
Bronze Age (c.2000-700BC) and relate to diverse activities, funerary and
ritual practice as well as farming and settlement. The range of evidence for
the following Iron Age is more restricted, as activity at this time is
believed to have been concentrated on the lower lying land which has been
subjected to more subsequent disturbance through intensive land use. Crown End
retains well preserved remains of a wide range of features, including those
typical of the Bronze Age, as well as some rarer features of the later Iron
Age.
The western extent of the features at Crown End appear to be defined by the
cross dyke. Cross dykes are linear earthworks comprising of one or more
ditches and parallel banks, frequently incorporating a row of large stones,
which run across ridges or spurs. Where excavated they are normally found to
be Bronze Age in date, although some appear to have been reused in later
periods. They are generally considered to have acted as territorial boundary
markers and are of considerable importance for the analysis of prehistoric
land use. The example at Crown End is of particular interest as it appears to
have been left uncompleted.
The cairnfield is the most extensive part of the monument. Prehistoric
exploitation of the relatively thin upland soils led to erosion and a build up
of surface stone which was cleared into clearance cairns in an attempt to
increase the amount of land available for farming. The earliest clearance
cairns were constructed from the Neolithic period (from c.3400BC), although
the majority of examples appear to date to the Bronze Age, with a few being
later in date. Excavations on similar sites have shown that lines of cairns
were often supplemented by fences or hedges to form small cultivation plots,
and that some cairns were also used for cremation burials. The more regular
and carefully constructed cairns, especially the example with the encircling
ditch, are considered to be small round cairns. These are Bronze Age funerary
monuments, stone mounds constructed over one or more burials. They vary
considerably in size and frequently occupy prominent locations. Unlike most
more isolated burial mounds on the moors, the examples at Crown End have not
been disturbed by antiquarian excavation and they are thus of particular
importance. The embanked field system and scatter of hut circles at the
eastern end of the monument is considered to represent an area of more
intensive land use based around a small settlement. The generally rectangular
fields form what is termed a regular aggregate field system, with principal
boundaries arranged on two main axes at right angles to each other. This
style of field system was in common use from the Bronze Age to the end of the
5th century AD and is thought to have frequently incorporated hedges or
fences. The scatter of hut circles are typical of unenclosed upland
prehistoric settlements, with the more irregular smaller enclosures
representing garden or building plots which will retain additional buried
remains. The square enclosure is considered to be an example of an enclosed
settlement site which may have replaced the earlier scatter of hut circles. A
number of similar examples survive as upstanding earthworks on the North York
Moors, typically between 0.1ha and 0.5ha in area. Few have been subjected to
systematic excavation, but examples which have been investigated have provided
evidence of settlement, including the presence of buildings. Some of the
enclosures may also have functioned as stock enclosures. Where dating evidence
has been uncovered, they are normally found to be Iron Age or Romano-British
(c.700BC-400AD). The iron slag found in the enclosure's bank supports
an Iron Age date and indicates that the buried remains of one or more
bloomeries will be close by. Bloomeries were clay furnaces up to around 1m in
diameter in which iron ore and charcoal was fired producing iron and waste
slag. The technology developed from the pre-Roman Iron Age through into the
medieval period and was eventually replaced by the invention of the blast
furnace. Bloomeries and their slag retain important information about the
technology of early metal working, with Iron Age examples being particularly
rare.
The prehistoric remains at Crown End are both extensive and well preserved.
They include a wide variety of remains including evidence of settlement,
farming and funerary activity. The evidence of use spaning the Bronze and Iron
Ages is noteworthy and the landscape will retain important information about
the economy and social organisation of the later prehistory of the North York
Moors.