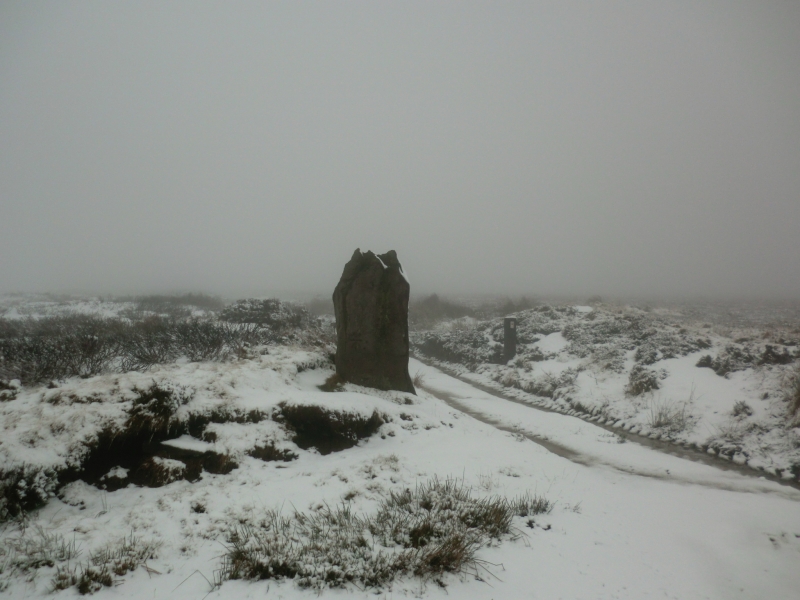 The monument includes a prehistoric standing stone and the associated buried
deposits immediately around its base. The monument, which is Listed Grade II
is sited on moorland beside the Castleton to Hutton-Le-Hole road where it is
crossed by a trackway. It stands at the intersection of the parishes of
Rosendale West, Farndale East and Westerdale.
The Margery Bradley standing stone is considered to date to the Bronze Age
and to be roughly contemporary with Flat Howe round barrow which lies about
240m to the south west and is the subject of a separate scheduling. The stone
is a rough, undressed slab around 1m wide, 0.35m thick and standing 2.1m above
the current ground surface. It is orientated so that its largest surfaces face
east and west and not to line up with either the road or the trackway. At the
top of the west face there are the carved initials `T.D.' which are thought to
stand for Thomas Duncombe and to have been left in the 18th century as an
estate boundary mark. Carved into the foot of the east face there is an
Ordnance Survey benchmark.

The Margery Bradley standing stone is a good, well preserved example of its
type. Its importance is heightened by its continued use into historic times as
a marker stone for parish boundaries, a trackway, 18th century estate boundary
and as a benchmark. The nearby Flat Howe round barrow, the subject of a
separate scheduling, is considered to be roughly contemporary, and adds
further importance to the monument.