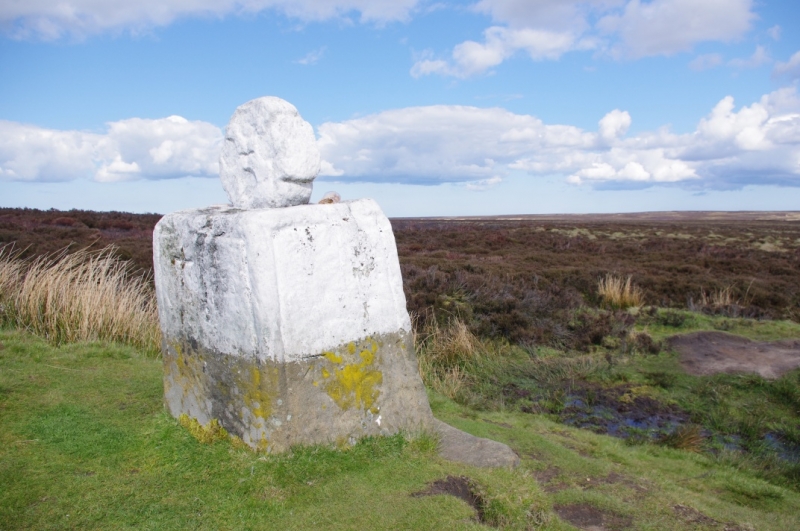 The monument includes a standing cross, Listed Grade II, used as a boundary
marker and known as Fat Betty or the White Cross. It stands on Danby Moor at
the junction of three parishes whose boundaries were fixed during the medieval
period. It is on the north side of a minor road to Rosedale 510m to the east
of the cross known as Young Ralph.

The White Cross survives as a cross base with a cross head set above. The
shaft is missing. The base is a block of local gritstone 0.88m by 0.75m at the
ground level tapering to 0.72m by 0.64m at the top. Each corner is finished
with a roll moulding as is the top edge creating panels on each face. There is
no trace of a socket and the head is pegged on to the top of the block with
its faces to the east and west. The head is shaped in a circle 0.46m across
with four circular indentations on each face.

On the north side of the base is the date 1919 cut in the stone. On the west
side is an inscription BS IB 1953. Neither inscription bears on a date for
this monument. There is also an OS benchmark on the west face. The cross has
been repeatedly whitewashed over the years in accordance with the practice of
the Downe Estate on which it stands.

The cross has been set up on Danby Moor to mark the meeting of the old
parishes of Danby, Westerdale and Rosedale. It also marks the side of an old
road down to Rosedale from the cross called Young Ralph. The road is mentioned
in a 13th century charter from Guisborough.

The wayside cross and boundary marker known as Fat Betty is in good
condition and although the shaft is missing enough survives of the base and
head to establish that it is a wheelhead cross of the 10th or 11th century.
This makes it the only surviving example of this type in the region.
It is in its original position on a road across the Danby Moors which is
attested from a 13th century charter. The cross also marks the meeting
point of the three original parishes of Danby, Westerdale and Rosedale.