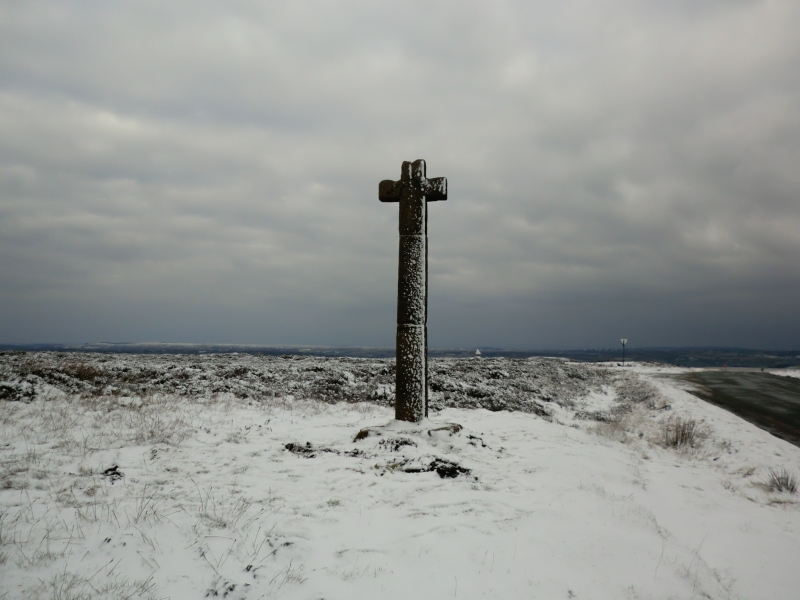 The monument includes a wayside cross, Listed Grade II*, known as Young Ralph
situated on Westerdale Moor 20m south of the junction of the road from
Rosedale to Castleton and the turning north west to Westerdale.

The monument survives as a cross base and shaft with an integral head. It is
made of local fine gritstone and has been broken and repaired. The base is
0.28m high and 1.02m wide on the south face and 0.94m deep. It is worn on the
north west corner. The cross stands 2.4m high on the base with an integral
head 0.88m across the arms. The shaft is 0.31m by 0.32m with no taper to the
top. The shaft has a slight chamfer on each corner up to the head. The surface
of the whole shows marks of stone dressing with a pick rather than the usual
chisel.

The cross has been broken in two places and repaired with steel pins and
cement at a point 1.1m and 2.08m from the base. A carved heart shaped motif in
the centre of the south face of the cross head may not be original.

The cross was broken in 1984 and in 1990. It is in its original position and
marks the boundary of the Wapentake of Pickering Lyth mentioned in medieval
charters.

The wayside cross and boundary marker known as Young Ralph survive complete
even though previously broken and repaired. The cross marks the highest point
on the old road from Keldholme in the south of the moors to Castleton in the
north. It also marks the boundary of the Wapentake of Pickering Lyth. It has
been adopted as the symbol of the North York Moors National Park.