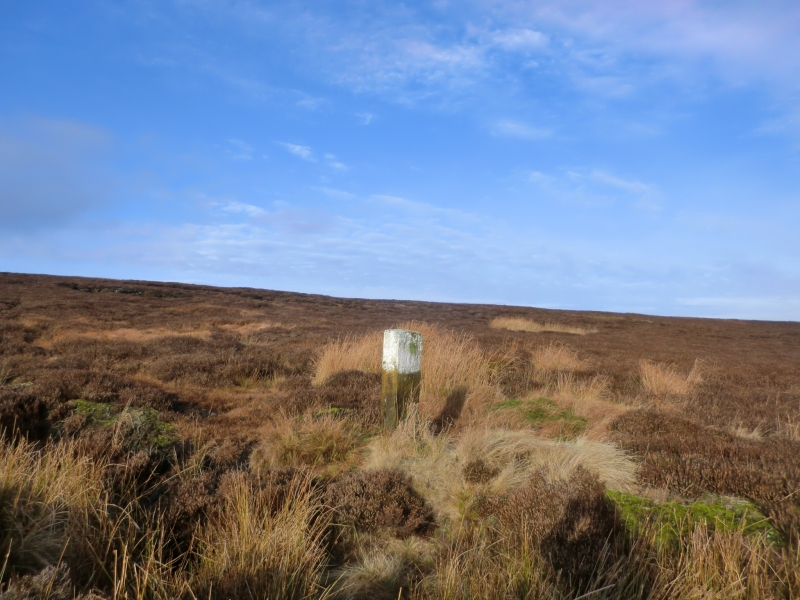 The monument includes buried and earthwork remains of a prehistoric burial
mound 150m north east of the road from Rosedale Abbey to the head of Rosedale.
The round barrow is prominently located, 30m north of the break of slope
defining the southern edge of a hilltop. This hilltop forms part of the
central watershed of the North York Moors.
The barrow was investigated by H and F Elgee in 1937. They excavated a 2.5m
wide east-west trench through the centre of the mound with a second 2.5m wide
trench extending from the centre southwards. The barrow was found to be
constructed with layers of sand and turf with a surface covering of large
stones around its flanks, leaving an area clear of stones 6.7m in diameter
centred on the top of the barrow. The edge of the barrow was defined by a
kerbing of large upright stones with a slight outer ditch 0.6m wide and a
further ring of stones beyond. About 3m from the centre of the barrow there
was part of a coffin 2.5m by 0.6m. Close by, to the north west, was a
carefully constructed canoe 2.75m long. The coffin also had a cover 2.7m long
which resembled the canoe in shape, but did not appear to have originally been
properly usable as a boat. All three were hewn from single oak tree trunks and
were orientated WSW-ENE. These oak timber finds are all extremely rare and
unusual for a prehistoric burial mound. In the coffin was the remains of a
body which appeared to have been fully clothed in linen and laid on a bed of
rushes, reeds or straw, with its head at the WSW end. Also in the coffin were
three flints and, near the body's left hip, part of the blade of a bronze
dagger. A disturbed secondary burial, immediately below the surface 0.5m east
of the barrow's summit, was also uncovered. This included fragments of an
undecorated cremation urn and those of a decorated cup. Along with the
associated deposit of cremated bone and charcoal, there was also part of a
bronze dagger, a fragment of a trefoil headed bronze pin and a stone battle
axe.
The barrow survives as a 20m diameter flat topped mound 1.2m high. Slight
hollows mark the position of the 1937 trenches, and a low cairn of stones
thought to be from the excavation now stands on the north west lip of the
barrow.

Excavations of round barrows in the region have shown that they demonstrate a
wide range of burial rites from simple scatters of cremated material to
coffin inhumations and cremations contained in urns, typically dating to the
Bronze Age. A common factor is that barrows were normally used for more than
one burial and that the primary burial was frequently on or below the original
ground surface, often with secondary burials located within the body of the
mound. Most barrows include a small number of grave goods. These are often
small pottery food vessels, but stone, bone, jet and bronze items have also
occasionally been found.
Loose Howe is a good example of a North York Moors round barrow. It is of
particular importance because of its documented excavation and the discovery
of a number of rare artifacts, including the coffin. The barrow was only
partly excavated and well over half of the mound survives undisturbed.