Chapel (on site of broch), Rubh' an Teampuill, Toe Head 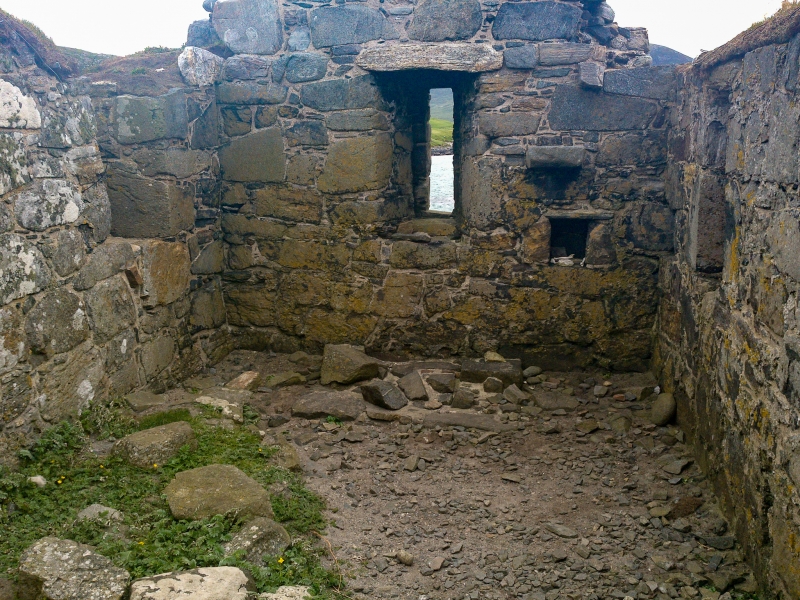 The monument comprises a chapel and underlying remains of earlier date, including an Iron Age broch.

The single-celled chapel, of late medieval date, measures 6.4m by 3.05m internally with walls about 0.84m thick. The masonry is of random rubble brought to courses and the walls remain to a height of 2m. Both gables are intaken. A high-level window and some corbelling at the west end suggest that there has been a gallery, while at the east end part of the altar seating, a corbel or image bracket and two small aumbries remain. The door lies towards the west end of the north wall.

The western part of the chapel partially overlies the remains of a broch, which has been reduced to its base course. Exploratory turf-stripping in September 1965 revealed that it had a rounded plan, some 16.6m in diameter with walls 3.7m thick and an entrance on the east.

Some 25m north of the chapel lie the remains of an enclosure wall of uncertain date, which cuts off the promontory on which the chapel stands.

The area to be scheduled is irregular on plan, measuring up to 125m E-W by 120 N-S. It includes the chapel, the broch remains and the enclosure wall, and is defined on the W, S and E by the edges of the promontory, and on the N by a line drawn 10m N of the N side of the enclosure wall. The area is marked in red on the accompanying map extract. This is an extension of the previous scheduled area, which included only the remains of the chapel itself, and none of the underlying or surrounding features.