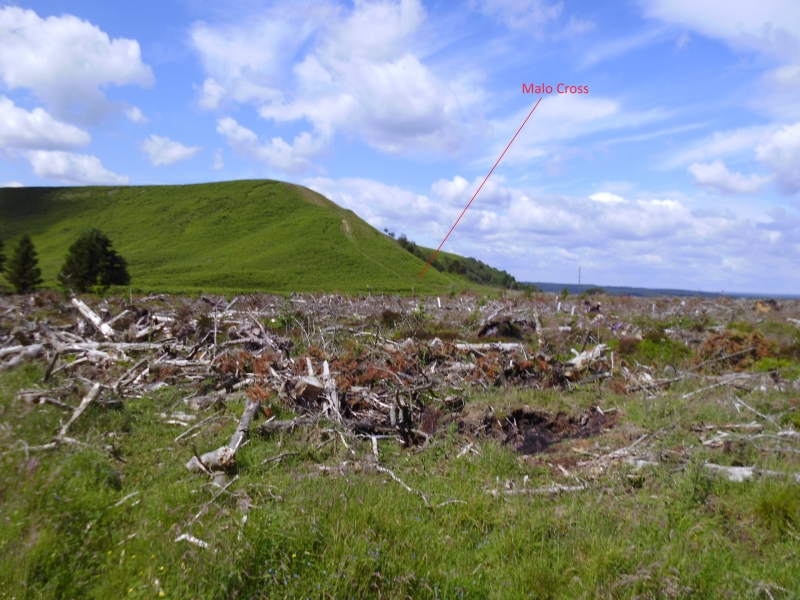 The cross has a shaft and cross head, constructed from a single piece of
sandstone, which stands 1.9m high. The arms of the cross are 0.25m long
and 0.3m wide and have rounded ends. The east face of the cross is
inscribed with the initials `K', `R' and `E' at the head and on the south
and north arms respectively. Between the initials in the centre of the
cross, there is a sign resembling a letter `I' crossed at the top and
bottom with curved rather than straight lines. These are the initials of
Sir Richard Egerton, who erected the cross in 1619 as a marker on the
boundary of his manor in the parish of Allerston; the cross marks the
boundary between the parishes of Allerston and Lockton today. The cross
shaft measures 0.5m north to south by 0.3m and tapers slightly towards the
top. Half way up the east face of the shaft there is an Ordnance Survey
bench mark. During the second half of the 19th century the cross was
removed, but was restored in 1924; the cross head had been broken from the
shaft and the repair is now visible as a line of cement about 1.3m above
the base of the shaft.

Malo Cross is situated to the west of an old road which branches south
from the Old Salt Road between Saltergate and Robin Hood's Bay; the line
of this road is visible as a hollow way running to the east of the
monument. A more recent track used as a public bridleway passes to the
immediate west of the cross.

Although it was broken in the past and is now repaired, Malo Cross 450m
south east of Nab Farm, is in a very good condition. It survives in its
original position and the surrounding area will retain archeological
deposits which will provide information about its construction. It is a
rare and well-documented example of an early 17th century cross, erected
after the main pre-Reformation period of medieval cross construction. As
such it provides insight into religious belief and practice during the
reign of James I and is an indicator of the local survival of `High
Church' beliefs at a time when crosses were being actively destroyed in
areas of strong Puritan belief.