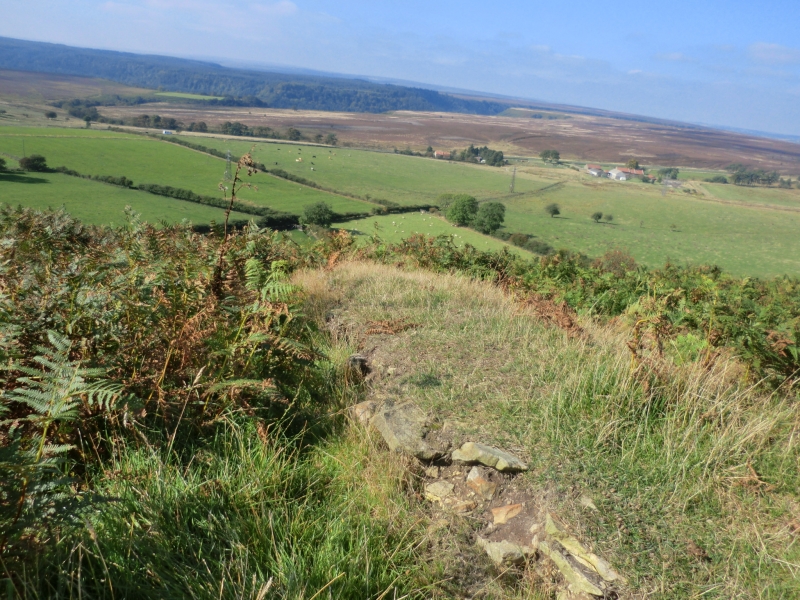 The monument includes a cross dyke which is situated at the northern edge
of the Tabular Hills. It occupies a prominent ridge-top position between
Saltergate Brow and Long Gill.

The cross dyke runs for 400m in an approximate north west to south east
direction, between the top of the steepest part of the scarp slope and the
top of the steep rocky slope at the head of Long Gill. It has a ditch
which runs between two parallel banks of earth and stone. The ditch is up
to 1.5m deep, measured from the tops of the flanking banks which stand
0.5m-0.9m high. The earthworks have an overall maximum width of 12m. The
cross dyke is breached by an unsurfaced track towards its western end;
there are six further modern breaches further to the east.

The monument forms part of a network of prehistoric boundaries which is
surrounded by many other prehistoric monuments, including burials and
field systems.

All fence posts along modern boundaries crossing and running alongside the
earthworks are excluded from the scheduling, although the ground beneath
them is included.

The cross dyke belongs to a network of prehistoric boundaries, dividing
the area to the south of the scarp edge of the Tabular Hills, between
Newton Dale in the west and Stain Dale in the east. It is thought to
represent a system of territorial land division which was constructed to
augment natural divisions of the landscape by river valleys and watersheds
and it is one of many such groups found on the Tabular Hills. Networks
such as these offer important scope for the study of land use for social,
ritual and agricultural purposes during the prehistoric period.