Thompson's Rigg cairnfield, including a platform cairn, round burial cairns, hollow ways, a standing stone, associated round barrows and a ring cairn 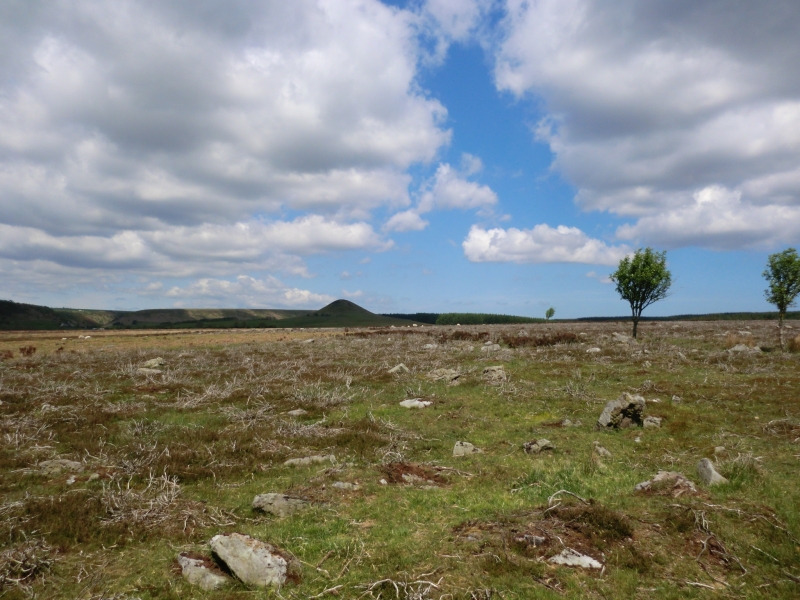 Round barrows and round cairns,their stone equivalents found in upland areas,
are funerary monuments dating from the Late Neolithic period to the Late
Bronze Age, with most examples belonging to the period 2400-1500 BC. They were
constructed as earthen or rubble mounds, sometimes ditched, which covered
single or multiple burials. They occur either in isolation or grouped as
cemeteries and often acted as a focus for burials in later periods. Often
superficially similar, although differing widely in size, they exhibit
regional variations in form and a diversity of burial practices. There are
over 10,000 surviving examples recorded nationally (many more have already
been destroyed), occurring across most of Britain. Platform barrows and cairns
are the rarest of the recognised types of round barrow, with fewer than 50
examples recorded nationally. They occur widely across southern England with a
marked concentration in East and West Sussex and can occur either in barrow
cemeteries (closely-spaced groups of barrows) or singly. This example from the
North Yorkshire Moors lies well outside this main distribution and is thus
especially rare and unusual. They were constructed as low, flat-topped mounds
of earth, often surrounded by a shallow ditch and occasionally crossed by an
entrance causeway. None of the known examples stands higher than 1m above
ground level, and most are considerably lower than this. Due to their
comparative visual insignificance when compared to the larger types of round
barrow, few were explored by 19th century antiquarians. As a result, few
platform barrows are disturbed by excavation and consequently they remain a
poorly understood class of monument. Their importance lies in their potential
for illustrating the diversity of beliefs and burial practices in the Bronze
Age and, due to their extreme rarity and considerable fragility, all
identified platform barrows would normally be considered to be of national
importance.
Often occupying prominent locations, round barrows and round cairns are a
major historic element in the modern landscape and their considerable
variation of form and longevity as a monument type provide important
information on the diversity of beliefs and social organisation amongst early
prehistoric communities. They are particularly representative of their period
and a substantial proportion of surviving examples are considered worthy of
protection.
Standing stones are prehistoric ritual or ceremonial monuments with dates
ranging from the Late Neolithic to the end of the Bronze Age for the few
excavated examples. They comprise single or paired upright orthostatic slabs,
ranging from under 1m to over 6m high where still erect. They are often
conspicuously sited and close to other contemporary monument classes. They can
be accompanied by various features: many occur in or on the edges of round
barrows, and where excavated, associated sub surface features have included
stone cists, stone settings, and various pits and hollows filled in with earth
containing human bone, cremations, charcoal, flints and pottery. Similar
deposits have been found in excavated sockets for standing stones, which range
considerably in depth. Standing stones may have functioned as markers for
routeways, territories, graves or meeting points, but their accompanying
features show that they also had a ritual function and that they form one of
several ritual monument classes of their period which often contain deposits
of cremation and domestic debris as an integral part. No national survey of
standing stones has been undertaken, and estimates range from 50 to 250 extant
examples, widely distributed throughout England but with concentrations in
Cornwall, the North York Moors, Cumbria, Derbyshire and the Cotswolds.
Standing stones are important as nationally rare monuments, with a high
longevity and demonstrating the diversity of ritual practices in the Late
Neolithic and Bronze Age.
A ring cairn is a prehistoric ritual monument comprising a circular bank of
stones surrounding a hollow central area. The bank may be kerbed on the
inside, and sometimes on the outside as well, with small uprights or laid
boulders. Ring cairns are found mainly in upland areas of England and are
interpreted as ritual monuments of early and middle Bronze Age date. The exact
nature of the rituals concerned is not fully understood, but excavation has
revealed pits, some containing burials and others containing charcoal and
pottery, taken to indicate feasting activities associated with the burial
rituals. Ring cairns occasionally lie within round barrow cemeteries and in
northern England they are often associated with cairnfields.
The Thompson's Rigg cairnfield is in a very good state of preservation.
Significant information about its form and development will survive. Evidence
for the nature of Bronze Age agriculture will be preserved in the old ground
surface between the cairns and evidence for earlier land use will be preserved
beneath the cairns and field banks. The cairnfield is embedded in peat
deposits with some waterlogged areas which will preserve a wider range of
environmental evidence than can be found on drier sites.
Despite disturbance, evidence for the date and form of the round barrows and
round burial cairns and the burials placed within them will be preserved.
Significant information about the form of construction and the nature of the
rituals associated with the use of the ring cairn and platform cairn will
survive. The platform cairn is the only example of this monuments type to have
been identified in the area of the North York Moors.
The relationships between the cairnfield, the round barrows, round burial
cairns, ring cairn, platform cairn and standing stone will provide evidence
for the diversity and development of social and ritual practice in the
prehistoric period and will offer important scope for the study of the
association between agricultural and ritual activity.