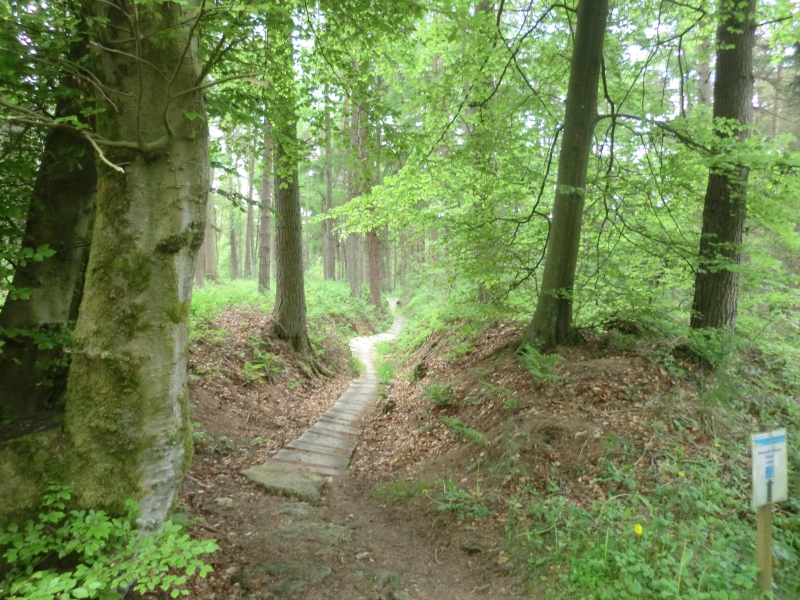 The monument includes a prehistoric linear boundary which is situated at the
northern edge of the Tabular Hills. It runs south from the top of the scarp
slope and turns to the south west at the southern end to run into the head of
Dargate Slack.
The boundary consists of three parallel steep-sided ditches, each of which
runs between two banks of earth and stone. The banks are up to 3.5m wide and
stand between 0.3m and 0.7m high. The ditches are up to 3.5m across and are
between 1.3m and 2m deep, measured from the tops of the adjacent banks.
Separating the three sets of ditches and banks there are two gaps which are
each between 2m and 4m wide. Together the earthworks have an overall width of
36m-38m. For the last 100m at the south western end, the boundary consists of
only the western ditch and banks, which follow the contours of Dargate Slack
and have an overall maximum width of 10m. The boundary is segmented by three
forestry tracks, two of which cross it in a north west to south east direction
and one from south west to north east. Additionally a large hollow way cuts
through the southern part of the boundary in a WNW to ESE direction. The
eastern ditch and banks are also crossed by a surfaced footpath which turns to
the north to run along the eastern bank adjacent to the central ditch, then
along the gap between the eastern and central sets of earthworks.
The monument forms part of a network of prehistoric linear boundaries which
are surrounded by many other prehistoric monuments, particularly burials.
The surfaces of the three forestry tracks and the footpath are excluded from
the scheduling, although the ground beneath them is included. A fourth
forestry track truncates the northern terminal of the linear boundary and lies
outside the protected area.

Despite limited disturbance, the prehistoric linear boundary in Dalby Forest
known as Dargate Dikes is in a good state of preservation. Important
environmental evidence which can be used to date the boundary and determine
contemporary land use will be preserved within the lowest ditch fills.
Evidence for earlier land use will be preserved in the old ground surface
beneath the banks.
The eastern Tabular Hills is an area which has many networks of prehistoric
land boundaries. These are thought to represent systems of territorial land
division which were constructed to augment natural divisions of the landscape
by river valleys and watersheds. The Dalby Forest and Scamridge areas have a
particular concentration which is thought to have originated in the Late
Neolithic or Early Bronze Age, earlier than most other prehistoric boundary
systems on the Tabular Hills. The networks within this concentration, and many
of their component boundaries, are notably complex and are of considerable
importance for understanding the development of later prehistoric society in
eastern Yorkshire.
The Dargate Dikes are part of the system of boundaries dividing the area
between Troutsdale in the south and the scarp edge of the Tabular Hills in the
north. Stratigraphic relationships between the components of the boundary will
survive and provide evidence for the sequence of construction and development
of the boundary system.