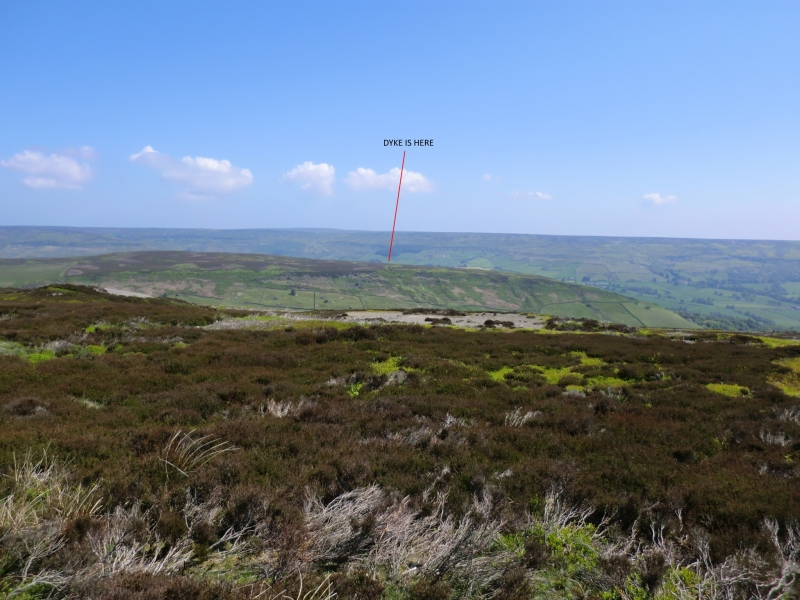 The monument includes earthwork and associated buried remains of a group of
prehistoric features on Horn Ridge. The earthworks include a cross dyke, a
bank and ditch that crosses the spine of the ridge, an area of clearance
cairns forming a cairnfield, a funerary round cairn, and at least two hut
circles.
The cross dyke, marked as an earthwork on the 1:10,000 map, is just over 250m
long, curving gently from the south west to ENE. It is formed by a bank
typically
up to around 2m high and 4m-6m wide with a mainly silted up ditch on its
northern side which is around 3m wide. A section of the dyke was excavated in
1959 which showed that the ditch was originally `U'-shaped in cross-section
and varied in depth between 0.5m and 1.2m deep. This small scale excavation
also showed that the bank was capped with boulders, some of which can still be
seen on the earthwork's surface. The dyke is cut through in a number of
places, most of which appear to be deliberate causeways which are thought to
be original features that have since been enlarged by natural weathering. The
cross dyke completely cuts off the end of the ridge which is sharply defined
by steep slopes and cliffs outlining a fairly level area some 350m north west
to south east and up to 250m wide. This whole area is regarded as of
archaeological significance and retains several identifiable earthworks and
will retain additional buried deposits. Towards the centre of this area, sited
on a high point, is a funerary round cairn some 15m in diameter and 0.8m high.
It is constructed mainly of stones typically 0.3m to 0.5m across, and has a
central excavation hollow around 4m by 2m, with a second 1m diameter pit in
its west side. The cairn has fine views across Farndale and over to Rudland
Rigg to the west and is intervisible with both Obtrusch and Golden Heights
round cairns to the south and west respectively. About 70m to the south of the
cairn there is a well-preserved hut circle with an internal diameter of 3m
formed by a low stoney bank. A second less obvious hut circle lies on the
opposite side of the ridge about 80m to the east with a possible third example
just to the north. Elsewhere within this area there are further low earthwork
mounds and shallow depressions indicating additional archaeological remains.
To the north west of the cross dyke there is a cairnfield, the north western
part of which is labelled as a field system on the 1:10,000 map. This
cairnfield lies mainly on a natural shelf on the south western side of the
spine of the ridge, at the top of Hawthorn Crag and the sharp scarp down into
West Gill to the south west. The cairns range considerably in size from little
more than 2m in diameter and 0.2m high, up to just over 1m high and 8m in
diameter. Although the cairns are scattered across the northern part of the
monument, there are two main concentrations centred 400m and 250m north west
of the south western end of the cross dyke. A hut circle has been recorded
within the southern of these two concentrations and sections of walling have
been noted to the north west. These and other low lying features are
considered to be concealed by the vegetation. The cairns within about 200m of
the cross dyke are small and very scattered. Most surface stone from this area
is thought to have been added to the cross dyke's bank.

The end of the spur delineated by the cross dyke is also of archaeological
importance, retaining a number of earthworks and associated buried remains. At
its centre there is a round cairn, a prehistoric funerary monument which also
dates to the Bronze Age (c.2000-700 BC). Round cairns were constructed as
stone mounds covering single or multiple burials and frequently acting as a
focus for later secondary burials in the body of the cairn or as graves in the
surrounding area. Often occupying prominent locations, they are a major visual
element in the modern landscape. Their considerable variation in form and
longevity as a monument type provide important information on the diversity of
beliefs and social organisation amongst early prehistoric communities. The
area also includes at least two hut circles. These can take a variety of
forms. Some are stone based and are visible as low walls or banks enclosing a
circular floor area. Others were timber constructions and only the shallow
groove in which the timber uprights used in the wall construction stood can
now be identified; this may survive as a slight earthwork feature or may be
visible on aerial photographs. Some can only be identified by the artificial
earthwork platforms created as level stances for the houses. Those on Horn
Ridge are of note because identified examples of hut circles on the North
Yorkshire Moors are particularly rare.
The cairnfield to the north west of the cross dyke also adds to the monument's
importance. Cairnfields are concentrations of cairns sited in close proximity
to one another. They often consist largely of clearance cairns, built with
stone cleared from the surrounding land surface to improve its use for
agriculture, and on occasion their distribution pattern can be seen to define
field plots. However, funerary cairns are also frequently incorporated,
although without excavation it may be impossible to determine which cairns
contain burials. Clearance cairns were constructed from the Neolithic period
(from c.3400 BC), although the majority of examples appear to be the result of
field clearance which began during the earlier Bronze Age and continued into
the later Bronze Age (2000-700 BC). The considerable longevity and variation
in the size, content and associations of cairnfields provide important
information on the development of land use and agricultural practices.
As a group, the prehistoric remains on Horn Ridge are certainly of national
importance with the cross dyke being a particularly fine example of its type.

Books and journals
McDonnell, J, A History of Helmsley Rievaulx and District, (1963), indexed