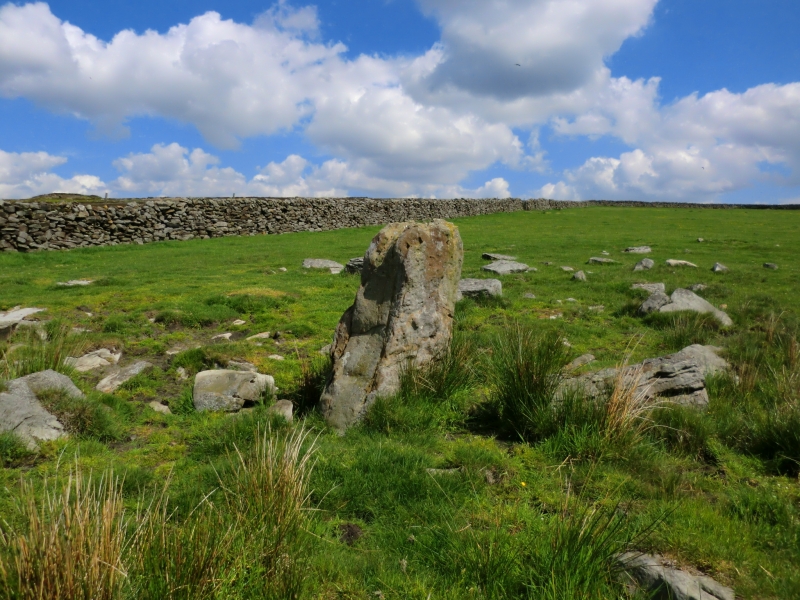 The monument includes the remains of an 18th and 19th century colliery
situated in open moorland on Rudland Rigg. The colliery remains include
shaft-mounds covering an extensive area of moorland.
Coal is thought to have been worked in the North York Moors in the medieval
period, although the first written evidence dates from 1715 for a colliery at
the south end of Bransdale on the Feversham Estate. The industry then expanded
eastward throughout the Feversham Estate and by the mid-18th century the first
colliery at Rudland was in operation. As production dwindled further workings
were opened at Upper Rudland Rigg in 1790, 400m to the north, which are the
subject of a separate scheduling. The coal from the moorland workings was
used partly for domestic fuel but mostly for firing lime kilns on the Tabular
Hills to the west.
Rudland Rigg colliery operated using the board and pillar method. Shafts were
sunk in lines following the coal measures running ENE to WSW and spaced
between 40m and 60m apart. The shafts were connected at the bottom with the
passages, or boards, which mined the seam, leaving a pillar of unexcavated
material between each board to support the roof. The passages also allowed
access and ventilation and, in some cases, drainage. The coal seam was poor
and lay at a modest depth of between 9m and 12m and was very thin, measuring
only 0.25m. Remains of this activity survive as shaft-mounds up to 50m across
which were formed by excavated spoil. The shaft-mounds will retain evidence of
pit top features such as winding gear, gin circles and temporary buildings for
shelter and storage. Evidence of initial sorting and working of the coal may
also be present at the shaft tops. The colliery was served by a complex of
trackways and sled tracks linking the shafts and allowing access, remains of
which will survive between the shaft-mounds.
A number of features are excluded from the scheduling; these are the surface
of modern tracks, although the ground beneath is included.

Coal has been mined in England since Roman times, and between 8,000 and 10,000
coal industry sites of all dates up to the collieries of post-war
nationalisation are estimated to survive in England. Three hundred and four
coal industry sites, representing approximately 3% of the estimated national
archaeological resource for the industry have been identified as being of
national importance. This selection, compiled and assessed through a
comprehensive survey of the coal industry, is designed to represent the
industry's chronological depth, technological breadth and regional diversity.
Extensive coal workings are typical of the medieval and post-medieval coal
industry, although this style of exploitation continued into the early 20th
century in some marginal areas which were worked on a very small scale with
little capital investment. In its simplest form extensive workings took coal
directly from the outcrop, digging closely spaced shallow pits, shafts or
levels which did not connect underground. Once shallower deposits had been
exhausted, deeper shafts giving access to underground interconnecting
galleries were developed. The difficulties of underground haulage and the need
for ventilation encouraged the sinking of an extensive spread of shafts in the
area worked. The remains of extensive coal workings typically survive as
surface earthworks directly above underground workings. They may include a
range of prospecting and exploitation features, including areas of
outcropping, adits and shaft mounds (circular or sub-circular spoil heaps
normally with a directly associated depression marking the shaft location). In
addition, some sites retain associated features such as gin circles (the
circular track used by a horse powering simple winding or pumping machinery),
trackways and other structures like huts. Some later sites also retain
evidence of the use of steam power, typically in the form of engine beds or
small reservoirs. Extensive coal mines vary considerably in form, depending on
the underlying geology, their date, and how the workings were originally
organised. Sites can include several hundred shafts spread over an extensive
area.
Coal occurs in significant deposits throughout large parts of England and this
has given rise to a variety of coalfields extending from the north of England
to the Kent coast. Each region has its own history of exploitation, and
characteristic sites range from the small, compact collieries of north
Somerset to the large, intensive units of the north east. A sample of the
better preserved sites, illustrating the regional, chronological and
technological range of extensive coal workings, together with rare individual
component features are considered to merit protection.

The colliery at Rudland Rigg preserves important evidence of coal extraction
and primary processing activities. The monument represents an early example
of an extensive colliery industry and offers important scope for the study of
the development and technology of the coal industry.