Golden Heights round cairn and wayside cross on Rudland Rigg 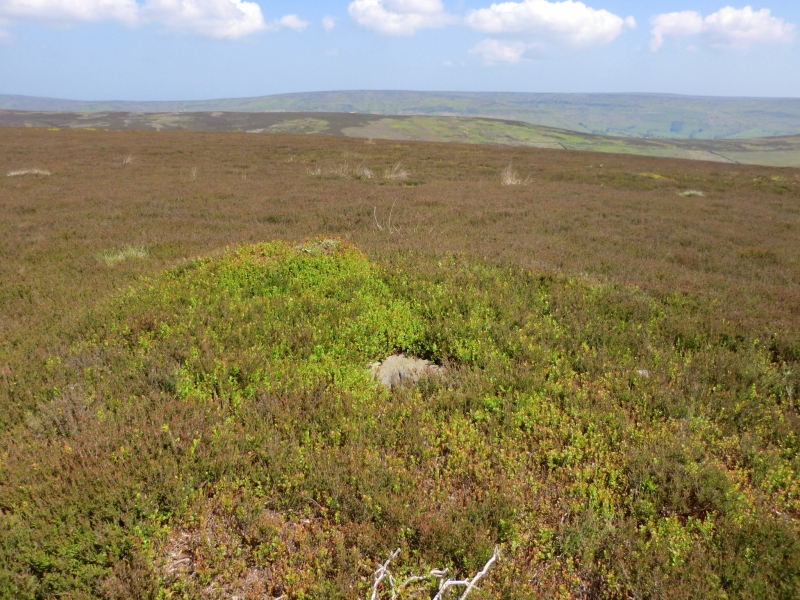 The monument includes the earthwork and associated buried remains of a
prehistoric burial mound on top of Golden Heights, a high point on Rudland
Rigg. Set into its top there is a socket stone for a wayside cross.
The cairn is sited on the eastern side of the narrow plateau that forms
Rudland Rigg at this point, and overlooks the prehistoric earthworks on Horn
Ridge to the east with Farndale beyond. It is intervisible with both Obtrusch
round cairn 2.3km to the south east and the southern two round barrows known
as Three Howes 2.4km to the north west, all of which form part of the skyline
and are the subject of separate schedulings. Golden Heights round cairn is
also intervisible with the site of Dicken Howe 1.2km to the NNW. The cairn
survives as a regular 7m diameter mound standing 0.6m high. Excavation of
other examples of round cairns in the region have shown that even where no
encircling depression is discernible on the modern ground surface, ditches
immediately around the outside of the mound frequently survive as infilled
features, containing additional archaeological deposits. A margin to allow for
such an infilled ditch up to 2m wide around the cairn is thus also included
within the monument. Set into the top of the cairn there is a dressed stone
0.6m by 0.6m by 0.25m thick, with its top flush with the surface of the cairn.
Through the thickness of the centre of the stone there is a socket 0.21m by
0.18m. The cairn is centred 25m east of Westside Road, an unmetalled trackway
which runs up the ridge of Rudland Rigg. This was one of the main routes over
the moors in the medieval period and ran from the north to Kirkbymoorside on
the south. The socket stone is thought to have been for a medieval wayside
cross marking the route.

Excavation of round cairns in the region have shown that they demonstrate a
very wide range of burial rites from simple scatters of cremated material to
coffin inhumations and cremations contained in urns, typically dating to the
Bronze Age. A common factor is that round cairns were normally used for more
than one burial and that the primary burial was frequently on or below the
original ground surface, often with secondary burials located within the body
of the mound. Most also include a small number of grave goods. These are often
small pottery food vessels, but stone, bone, jet and bronze items have also
occasionally been found. In the Bronze Age, many round cairns are thought to
have acted as territorial markers in addition to their role as burial sites.
Golden Heights round cairn, placed on the spine of Rudland Rigg is considered
to be one such example. This function continued into the medieval period,
marking a road across the moor, being reused to support a wayside cross. Such
crosses are one of several types of Christian cross erected during the
medieval period, typically acting as way markers in otherwise unmarked terrain
for routes for parishioners from outlying settlements, for funeral
processions, long distance pilgrimage routes or merely the path linking
ordinary settlements. Over 350 wayside crosses are known nationally,
concentrated in the South West in Cornwall and on Dartmoor, with a small group
found on the North Yorkshire Moors. Wayside crosses contribute significantly
to our understanding of medieval religious customs, and to our knowledge of
medieval route ways and settlement patterns.
Golden Heights round cairn is a well preserved example of a small prominently
placed cairn. Its medieval re-use for a wayside cross adds to its importance.