One of four round barrows known as Three Howes, 740m north east of Toad Hole 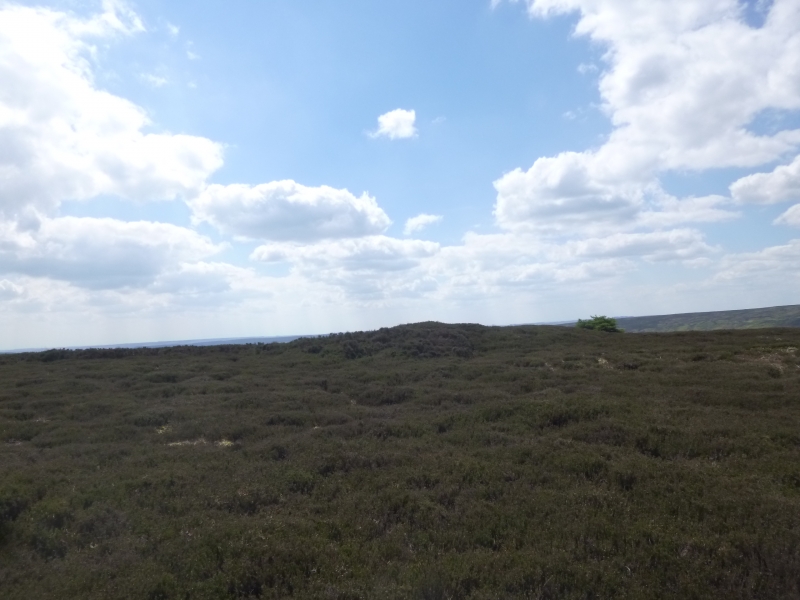 The monument includes the earthwork and associated buried remains of the
smallest and least prominent of a group of four prehistoric burial mounds
known as Three Howes. A closely spaced pair of mounds lie centred 110m to the
south east and the fourth barrow lies 110m to the NNW, all of which are the
subject of separate schedulings. Unlike the other three barrows in the group,
the monument does not form a prominent skyline feature, being relatively low,
although it has fine all round views, especially down Bransdale to the south
west. All four round barrows are sited on the western, highest side of the
plateau forming the highest part of Rudland Rigg. The monument is sited on
level ground, just east of the break of slope down into Bransdale. It survives
as an 11m diameter mound 0.6m high with a 2.5m diameter concave hollow in its
top which is a maximum of 0.3m deep. Excavation of other examples of round
barrows in the region have shown that even where no encircling depression is
discernible on the modern ground surface, ditches immediately around the
outside of the mound frequently survive as infilled features, containing
additional archaeological deposits. A margin to allow for such an infilled
ditch up to 2m wide around the barrow is thus also included within the
monument.

The majority of round barrows in the region were dug into by 19th century
antiquarians in search of burials and artifacts, leaving behind a central
depression as evidence of their work. However excavations in the latter half
of the 20th century have shown that round barrows typically contain
archaeological information that survives earlier digging. Secondary burials
tend to be located within the main body of the mound and sometimes one of
these was mistaken for the primary burial which was usual the goal of the
antiquarian. Even when the primary burial has been excavated, further
secondary burials often survive in the undisturbed surrounding part of the
mound and infilled ditch. Additional valuable information about the mound's
construction and the local environment at the time of its construction will
also survive antiquarian excavation.
This one of four round barrows known as Three Howes, 740m north east of Toad
Hole is one of an important group of relatively well-preserved round barrows
which will retain important information about Bronze Age society.