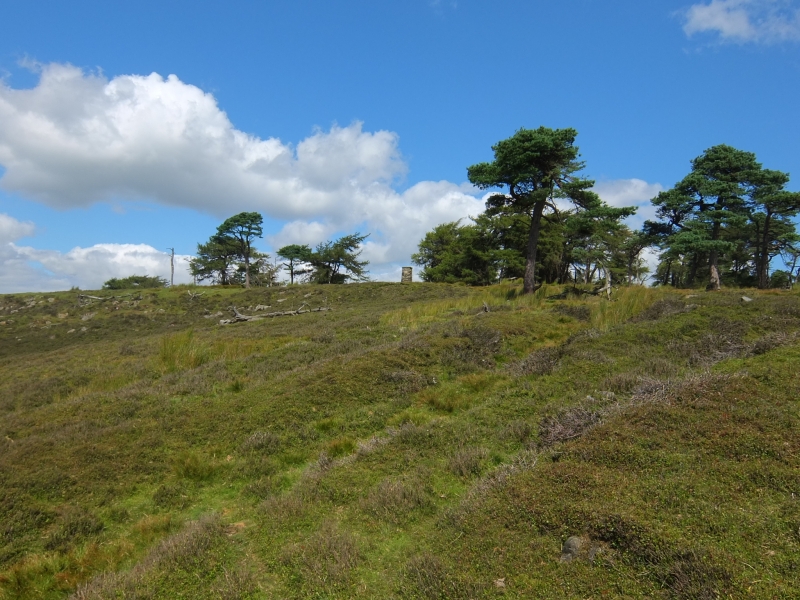 The monument includes the earthwork and associated buried remains of a
prehistoric burial mound constructed mainly of stones on the southern edge of
Bransdale Moor, immediately south of the drystone wall defining the northern
boundary of High Plantation.
The cairn is sited on level ground around 50m back from the break of slope
between the plateau forming Bransdale Moor and the hillside down into the
dale. From it there is a fine view down the length of Bransdale and the cairn
would have formed a skyline feature when viewed from the rest of the moor to
the north. Intervisibility of the monument with other cairns along Bransdale
Ridge to the west and with the Three Howes round barrows on Rudland Rigg to
the south east is partly obscured by trees within the plantation. The monument
is also intervisible with a prehistoric standing stone, Cammon Stone, on
Rudland Rigg 1.2km to the north east.
The cairn is 11m in diameter, standing to 0.6m high with a 5m diameter flat or
slightly concave top. It is mainly grassed over, but a small area of
disturbance in the north east quadrant shows that the cairn is mainly built of
stones, typically with 0.3m to 0.5m maximum dimension. Excavation of other
examples of round cairns in the region have shown that even where no
encircling depression is discernible on the modern ground surface, ditches
immediately around the outside of the mound frequently survive as infilled
features, containing additional archaeological deposits. A margin to allow for
such an infilled ditch up to 2m wide around the cairn is thus also included
within the monument.

Excavation of round cairns in the region have shown that they demonstrate a
very wide range of burial rites from simple scatters of cremated material to
coffin inhumations and cremations contained in urns, typically dating to the
Bronze Age. A common factor is that round cairns were normally used for more
than one burial and that the primary burial was frequently on or below the
original ground surface, often with secondary burials located within the body
of the mound. Most also include a small number of grave goods. These are often
small pottery food vessels, but stone, bone, jet and bronze items have also
occasionally been found. In the Bronze Age, many round cairns are thought to
have acted as territorial markers in addition to their role as burial sites.
The round cairn in High Plantation, 840m north east of Cockayne Lodge is a
very well-preserved example of a small prominently placed cairn. Unlike most
burial mounds in the area, it appears to have escaped excavation by 19th
century antiquarians.