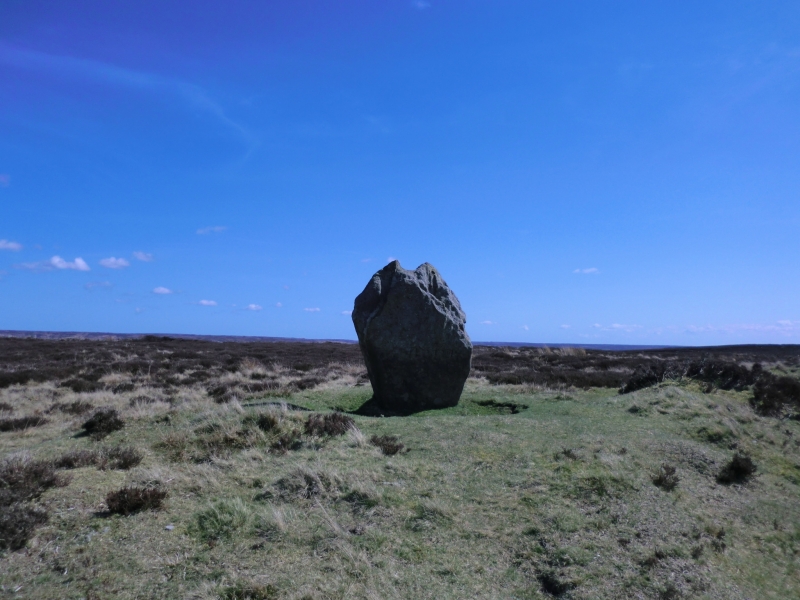 The monument includes a prehistoric standing stone and an adjacent recumbent
stone along with associated buried deposits. It is located 1.6km north east of
the hamlet of Cockayne, on the spine of Rudland Rigg overlooking the head of
Bransdale. It stands 5m to the west of an unmetalled byway known as Westside
Road, which runs down the spine of Rudland Rigg. This is thought to be an old
established route over the North York Moors which was recognised as a road in
the medieval period.
The standing stone, which is listed Grade II, is an undressed irregular slab
with a heavily weathered upper surface. From it there are impressive views
down the length of Bransdale to the south, from much of which the stone will
be visible as a small feature against the skyline. Cammon Stone is also
intervisible with the prominent group of Bronze Age round barrows known as
Three Howes nearly 2km to the SSE. The stone leans slightly to the west and
stands 1.4m above the surrounding ground surface. At its base it measures 0.8m
by 0.3m broadening to just over 1m by 0.4m at around 0.7m above the ground. It
is orientated so that its two larger faces point to the east and west. The
stone has three sets of inscriptions: on the west face, clearly visible to
people walking south east along Westside Road, there are six Hebrew characters
spelling the word halleluiah. This is reputed to have been inscribed by the
Reverend W Strickland, Vicar of Ingleby, in the 19th century. On the east face
there is a rough, faint inscription with the figures 1.7 above a mainly
indecipherable word of around 5 letters, the next to last being a W; and
finally, near the base on the south face there is an Ordnance Survey bench
mark symbol. All three sets of inscriptions are covered in lichen growth and
are thus not thought to be recent. Excavations of standing stones elsewhere
have shown that they often formed the focus for prehistoric cremation burials
and other ritualistic deposits placed in pits and hollows. The monument thus
includes an additional 4m margin to protect any buried archaeological remains
associated with the standing stone.
Due east of the standing stone there is a second irregular slab of rock lying
on the ground. This measures 2.7m east-west, 1.5m north-south and is at least
0.3m thick. It is slightly inclined so that its western end, nearest the
standing stone, is higher than its eastern end. This western end comes to a
rounded point which appears to point at the base of the standing stone which
is 1.5m further to the west. The recumbent stone is considered to be either a
second standing stone which has fallen some time in the past, or to be a
naturally placed slab which nonetheless functioned as part of the original
monument, acting as a focus for ritual or ceremonial activity. Thus the 4m
margin is also extended around the outside of this stone to protect any
associated buried deposits.

Cammon Stone is a good example of a prehistoric standing stone. Its three
inscriptions and the adjacent recumbent stone add to its interest. It
continues to function as a landmark along a route over the moors, a role that
it has fulfilled for many centuries.