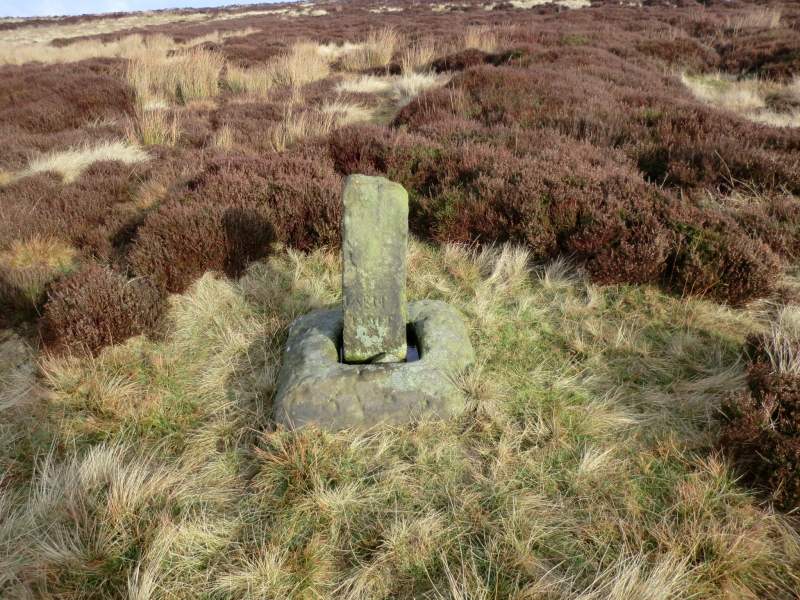 The monument comprises a cross base with part of the original shaft placed
upright in the socket hole and another fragment of the shaft lying in the
heather 1m to the north west.
The base measures 0.68m by 0.7m and tapers to the socket hole. It appears to
be deeply earthfast and stands only 0.3m high above the ground. The socket
hole is 0.3m by 0.3m. The shaft fragment measures 0.23m by 0.21m and is 0.65m
high. It is held by a chock stone in the socket. The other fragment of the
shaft measures 0.3m by 0.27m and is 0.8m long. The surface, particularly on
the west face, appears to have been decorated with deeply drilled holes which
suggest an interlaced pattern. On the south face it is engraved with the name
FARNDALE; on the north face, BRANSDALE; on the east side STOXL RODE; on the
west side, KIRBY RODE. This confirms its present function as a waymarker.
The decoration suggests a date of construction in the late Anglo-Saxon period
and a function as a boundary cross for a monastic estate. The decoration is
so vestigial that this supposition must remain in question.
The medieval route commemorated by the monument was the road from
Kirbymoorside to the north along Rudland Rigg and leading to Battersby Bank.
This was known as the Waingate.

The wayside cross called Cockan Cross survives well in spite of the broken
shaft and loss of the head. It is in its original position beside a major
medieval route known as the Waingate. It serves to remind us of the piety
expected of the medieval traveller and the extent to which the landscape was
controlled by the Church at that time.