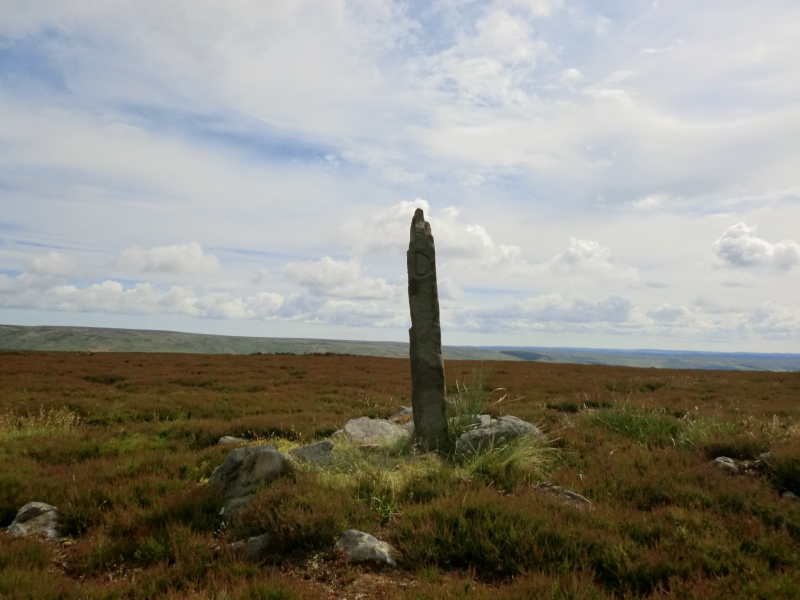 The monument includes buried and earthwork remains of a prehistoric burial
mound which is topped by an 18th century boundary stone. It is located 250m
east of the Castleton to Hutton-le-Hole road. It survives in an area
extensively worked for coal in the post-medieval period, an activity which has
left behind numerous spoil heaps.
The round cairn is sited on the northern edge of a flat plateau which forms a
high point on Blakey Ridge. It is prominently located and is intervisible with
Blakey Howe and Little Blakey Howe to the north and with Pike Howe and other
burial mounds to the south. It is up to 8m in diameter and 0.6m high, mainly
constructed of stone. These stones vary considerably in size, most being up to
0.2 across, but with several 0.4m to 0.7m across. On top of the cairn, on its
northern side, there is a roughly shaped boundary stone 0.3m by 0.2m, standing
1.5m tall, with its larger faces directed north and south. The initial T is
inscribed on the north face and D on the west face. This is thought to refer
to Thomas Duncombe who owned the Duncombe Estate in the early 18th century.
This stone may be a reused prehistoric standing stone associated with the
round cairn.
Although there is no ditch visible around the cairn, a margin of 3m
surrounding the mound is included to allow for its likely survival. This is
because excavations of other examples in the region have shown that, even
where no encircling depression is discernible on the modern ground surface,
ditches immediately around the outside of the mound frequently survive as
infilled features, containing additional archaeological deposits.

Excavation of round cairns and their earthen equivalents, round barrows, in
the region have shown that they demonstrate a very wide range of burial rites
from simple scatters of cremated material to coffin inhumations and cremations
contained in urns, typically dating to the Bronze Age. A common factor is that
they were normally used for more than one burial and that the primary burial
was frequently on or below the original ground surface, often with secondary
burials located within the body of the mound. In the Bronze Age, many cairns
and barrows are thought to have acted as territorial markers in addition to
their role as burial sites. Kettle Howe, placed on the spine of Blakey Ridge,
is considered to be one such example. This function has continued, as shown by
the inscribed boundary stone, and the barrow now marks a parish boundary.
Kettle Howe is a good, well preserved example of a small round cairn. The
boundary stone, a good 18th century example possibly reusing a prehistoric
standing stone, adds additional interest.