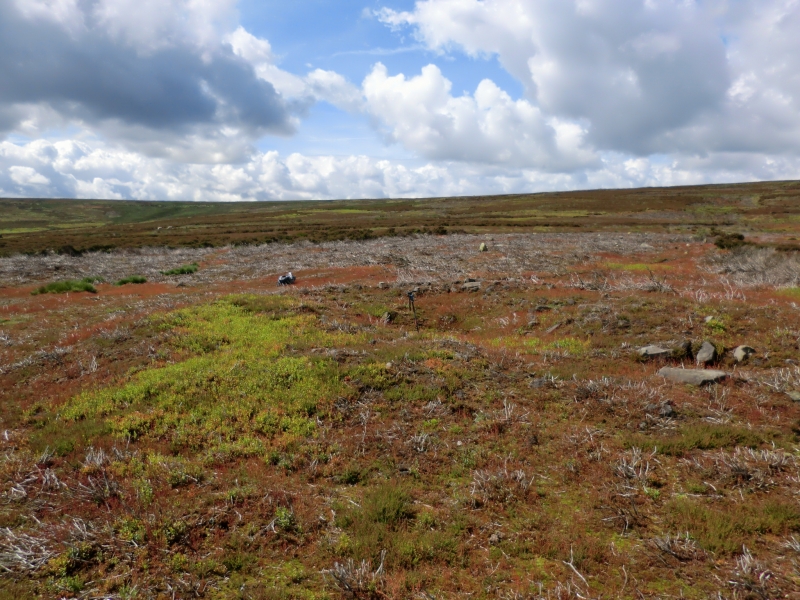 The monument includes buried and earthwork remains of a prehistoric burial
mound. It is located 560m south west of High Thorgill Farm, to the east of the
scarp below Blakey Ridge.
The round barrow is located centrally on a slight spur which extends north
eastwards from Blakey Ridge, set back 20m-30m from the sharp break of slope
down into Rosedale. From it, the Three Howes round barrows to the south east
and Blakey Howe to the north west can be seen, but not Pike Howe to the west.
However, it is not easily intervisible with these barrows, being only a
maximum of 10m in diameter and standing 0.4m high. It is mainly constructed of
earth with some stone and shows evidence of antiquarian excavation, with a
central hollow 5m in diameter at its top and 1m diameter at the base. Although
there is no ditch visible around the barrow, a 3m margin surrounding the mound
is included to allow for its likely survival. This is because excavations of
other examples in the region have shown that even where no encircling
depression is discernible on the modern ground surface, ditches immediately
around the outside of the mound frequently survive as infilled features,
containing additional archaeological deposits.

The majority of round barrows in the region were dug into by 19th century
antiquarians in search of burials and artifacts, leaving behind a central
depression as evidence of their work. However excavations in the latter half
of the 20th century have shown that round barrows typically contain
archaeological information that survives earlier digging. These excavations
have shown that they demonstrate a very wide range of burial rites from simple
scatters of cremated material to coffin inhumations and cremations contained
in urns, typically dating to the Bronze Age. A common factor is that barrows
were normally used for more than one burial and that the primary burial was
frequently on or below the original ground surface, often with secondary
burials located within the body of the mound which were frequently missed by
antiquarian excavators.
The round barrow 560m south west of High Thorgill Farm will retain
archaeological deposits. Its relatively unusual position for the area, close
to the scarp edge rather than on a watershed or other more prominent
location, gives the barrow additional interest.