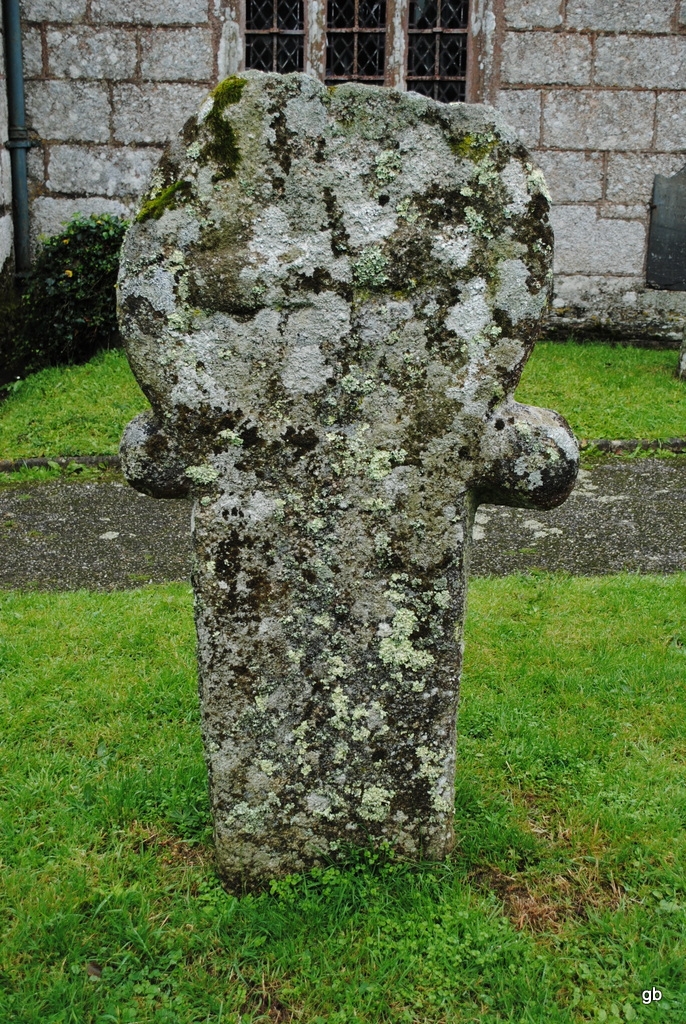 The monument includes an early Christian memorial stone, known as the Castle
Goff Stone and a medieval wayside cross, known as the Valley Truckle Cross in
the churchyard at Lanteglos by Camelford.
The Castle Goff Stone survives as an upright granite shaft measuring 2m high
by 0.45m wide at the base tapering to 0.32m at the top and is 0.19m thick at
the base tapering to 0.14m at the top. The principal faces are orientated
north-south. The south principal face bears an inscription incised in an early
medieval form of script derived from Roman style capitals running down the
shaft in two lines; a third line of the inscription is incised on the west
side. The inscription has been read as `AELSELD 7 GENERED WOHTE YSNE SYBSTEL
FOR AELWYNEYS SOUL 7 FOR HEYSEL' which translates as `Aelsel and Genere made
this family stone or place of peace for Aelwine's soul and for themselves or
Heysel'. The inscription is visible though not clearly legible. This
inscription is unusual as it is written in Old English rather than Latin, and
contains English names. The use of English names suggests that this stone
dates from the 11th century.
The Castle Goff Stone was first recorded in 1858 being used to prop up the
wall of a barn at Lanteglos. There was a local tradition that the stone came
from near the Castle Goff earthworks, 1.25km to the north west of the church.
By 1870 the Stone was purchased by the Rector and moved to the Rectory gardens
and in 1877 a cross head was fixed on top of the Stone. The cross head was
removed in the 1890s and in 1900 the Castle Goff Stone was moved into the
churchyard and erected in its present position.
The Valley Truckle Cross survives as an upright granite shaft with a round,
`wheel' head, its principal faces orientated north-south. The overall height
of the cross is 1.43m. The head measures 0.69m wide by 0.13m thick. Both
principal faces bear a relief equal limbed cross; a wide bead encircles the
outer edge of the head on both sides. The top of the head has been fractured
on the north face. Immediately below the head, at the neck are two
projections, one to either side of the shaft. The shaft measures 0.46m wide by
0.17m thick.
This cross was discovered with its head buried in the ground near a
blacksmiths shop at Valley Truckle, a crossroads on a main route into Cornwall
from the east. Valley Truckle is on the A39, a major ancient and modern route
into north Cornwall, where it is crossed by a route to Boscastle on the north
coast and a minor route to Advent on Bodmin Moor. It had been used for the
binding of iron tires on cart wheels; a part of the shaft had been rounded off
for this purpose. By 1896 when the historian, Langdon, recorded it the cross
was in the Rectory garden, some time after it was re-erected in the
churchyard.
The metalled surface of the footpath between the memorial stone and the cross,
the cement gutter or drain to the north of the memorial stone, the chest tomb
to the east and another to the west of the memorial stone, the chest tomb to
the west and the flat gravestone to the east of the cross, where they fall
within the monument's protective margin, are excluded from the scheduling,
although the ground beneath is included.

The early Christian memorial stone known as the Castle Goff stone survives
well, despite having been reused to prop up a barn wall in the past. Its
inscription is clear though not easily legible. The inscription itself is of
importance from a period generally lacking in such historical references. It
is also a rare example of a memorial stone in Cornwall with an early English
inscription rather than the more usual Latin. The location here of the Valley
Truckle Cross, a medieval wayside cross, represents an unusual association.