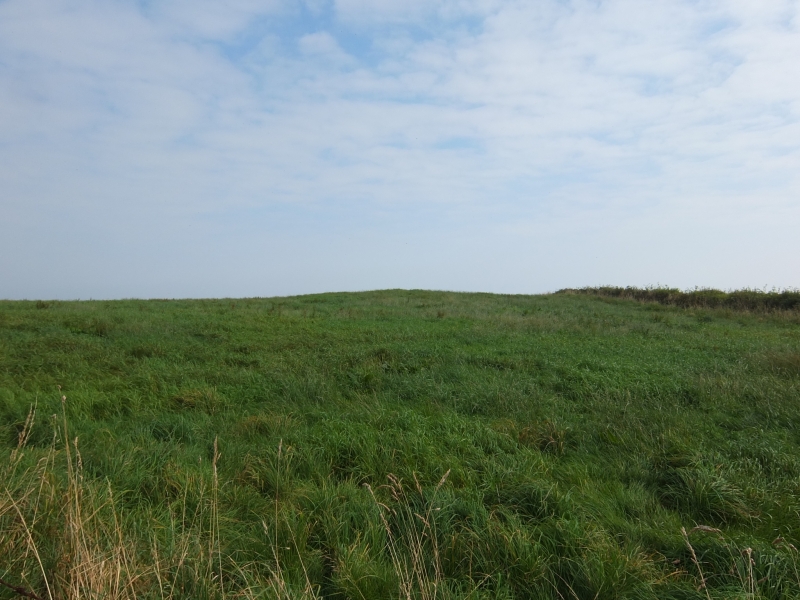 The monument includes a round barrow situated at the south east edge of a
level prominence on the north edge of the North York Moors.
The barrow has an earth and stone mound which has been spread by ploughing. It
is up to 22m in diameter and stands up to 1m high. Part excavation in 1890 by
Canon W Greenwell uncovered two cists consisting of stone slabs set vertically
into the ground and these would have surrounded burials. He also found
pottery, two jet ornaments and a cup marked stone within the matrix of the
mound.
The barrow was originally one of at least nine, only three of which survive as
earthworks, the remainder having been ploughed out.

The round barrow on Whinny Hill, 270m south west of High Farm is important
because of its spatial association with two other surviving round barrows.
Together with other barrows in the area, it is thought to represent a
territorial marker. Similar groups of monuments are also known across the
west and central areas of the North York Moors, providing important insight
into burial practices. Such groupings of monuments offer important scope for
the study of land division for social and ritual purposes in different
geographical areas during the prehistoric period.
Prehistoric rock art is found on natural rock outcrops in many areas of
upland Britain. It is especially common in the north of England in
Northumberland, Durham and North and West Yorkshire. The most common form of
decoration is the `cup and ring' marking, where expanses of small cup like
hollows are pecked into the surface of the rock. These cups may be surrounded
by one or more `rings'. Single pecked lines extending from the cup through the
rings may also exist, providing the design with a `tail'. Pecked lines or
grooves can also exist in isolation from cup and ring decoration. Other shapes
and patterns also occur, but are less frequent. Carvings may occur singularly,
in small groups, or may cover extensive areas of rock surface. They date to
the Late Neolithic and Bronze Age periods (c.2800-500 BC) and provide one of
our most important insights into prehistoric `art'. The exact meaning of the
designs remains unknown, but they may be interpreted as sacred or religious
symbols. Frequently they are found close to contemporary burial monuments and
the symbols are also found on portable stones placed directly next to burials
or incorporated into burial mounds. Around 800 examples of prehistoric rock
art have been recorded in England. This is unlikely to be a realistic
reflection of the number carved in prehistory. Many will have been overgrown
or destroyed in activities such as quarrying. All positively identified
prehistoric rock art sites exhibiting a significant group of designs normally
will be identified as nationally important.
This barrow is one of several which include decorated cup marked stones,
distributed along the northern and eastern periphery of the North York Moors.
As such it can be dated to the last part of the Neolithic period or Early
Bronze Age, earlier than many similar barrows found on the central moorland.