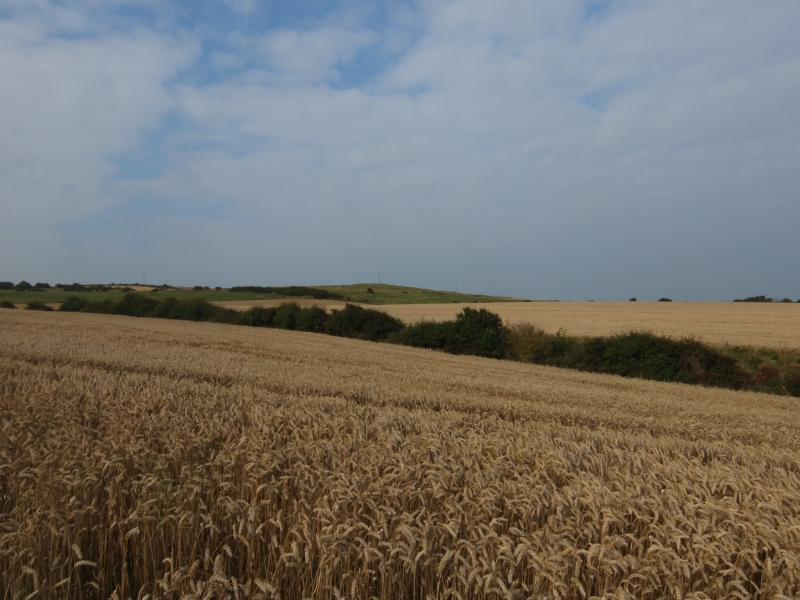 The monument includes a Roman signal station situated in a prominent position
above the cliffs of the north east Yorkshire coast.
The signal station is visible as a square mound measuring up to 30m across and
standing up to 1.4m high. It has rounded corners and a top which is generally
level, although there are surface irregularities. Excavation in 1918 exposed
the foundations and surviving fragments of a stone wall strengthened by
circular bastions at the corners, which surrounded a courtyard with the
footings and lower courses of a square stone tower in the centre. The entrance
to the courtyard was through a gateway in the south side and the entrance to
the tower was opposite the gateway. The surviving mound covers these remains.
The excavation also exposed a well within the courtyard and this is still
visible as a hollow in the south east corner of the mound. Originally the
outer wall was surrounded by a berm 10m wide and a ditch 3.6m wide, with a
bridge allowing access across the ditch to the entrance. The berm survives as
a roughly level area around the mound, measuring 8m-10m across, but the ditch
is no longer visible as an earthwork, having silted up over the years and
subsequently been ploughed over since the medieval period. The 1918 excavators
concluded that the signal station had been short lived and had been destroyed
suddenly towards the end of the 4th century AD.

Roman signal stations were rectangular towers of stone or wood situated within
ditched, embanked, palisaded or walled enclosures. They were built by the
Roman army for military observation and signalling by means of fire or smoke.
They normally formed an element of a wider system of defence and signalling
between military sites such as forts and camps and towns, generally as part of
a chain of stations to cover long distances. In northern England stations were
used in particular to augment the main frontier formed by Hadrian's Wall, but
elsewhere stations were constructed along the coast to keep lookout over the
sea and to signal information both along the coast and to inland sites.
Signal stations were constructed and used in Britain mainly during three
distinct periods. The earliest examples were built between AD 50 and AD 117
for use during the earliest military campaigns during the conquest period.
Signal stations at this period took the form of a wooden tower surrounded by a
ditch and bank and possibly a slight timber palisade. After AD 117 towers were
more usually built in stone, some on the same site as earlier timber towers.
The latest series, in the mid-4th century AD, were more substantial stone
signal stations built mainly along the Yorkshire coast. These had a tower up
to 30m high which was surrounded by a curtain wall and external ditch.
Signal stations survive as low earthworks, or their below ground remains may
be identified on aerial photographs. Fewer than 50 examples have been
identified in England. As one of a small group of Roman military monuments,
which are important in representing army strategy, government policy and the
pattern of military control, signal stations are of importance to our
understanding of the period. All Roman signal stations with surviving
archaeological remains are considered to be nationally important.

Despite excavation, archaeological deposits providing information about the
structure and use of the Roman signal station 130m south east of Scratch Alley
will survive intact. Information relating to earlier occupation of the site
will survive beneath extant walls, foundations and surfaces and important
environmental evidence for the contemporary environment and economy will be
preserved within the ditch fills.
The signal station at Goldsborough, 130m south east of Scratch Alley is one in
a chain of five distributed along the north east Yorkshire coast. The study of
these related sites will provide valuable insight into the nature and duration
of the occupation of this area during the late Roman period and the causes of
its decline thereafter.