A Scheduled Monument in Bradnop, Staffordshire 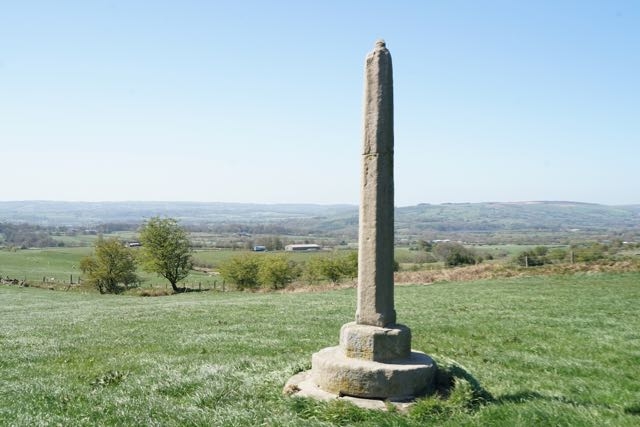 The monument includes a standing stone cross, known locally as the Butter
Cross, located 700m north east of Stile House Farm. The cross, Listed Grade
II, is of stepped form and is thought to be late medieval in date with modern
repairs. The monument includes the base, consisting of two steps, and a
socket-stone and the shaft.
The steps are circular in plan, the lower constructed of gritstone blocks
while the upper step has been constructed from a single stone block. On this
step stands the socket-stone which is octagonal in section and now held
together by iron cramps. Set into the socket-stone is the tapering, stone
shaft, also octagonal in section. Alternate faces of the shaft have stops near
the base so that it is square for the bottom 100mm where it slots into the
socket-stone. The shaft is approximately 2.5m high and its apex has been
worked into a tenon onto which the head would have originally fitted. The
present height of the cross is approximately 3.2m high.

The Butter Cross north east of Stile House Farm is a good example of a
medieval standing cross with a stepped base. Situated in an isolated location,
it is believed to stand in or near its original position and archaeological
deposits relating to the monument's construction and use in this location are
likely to survive intact. The cross has been little altered in modern times
and has continued in use as an important landmark.