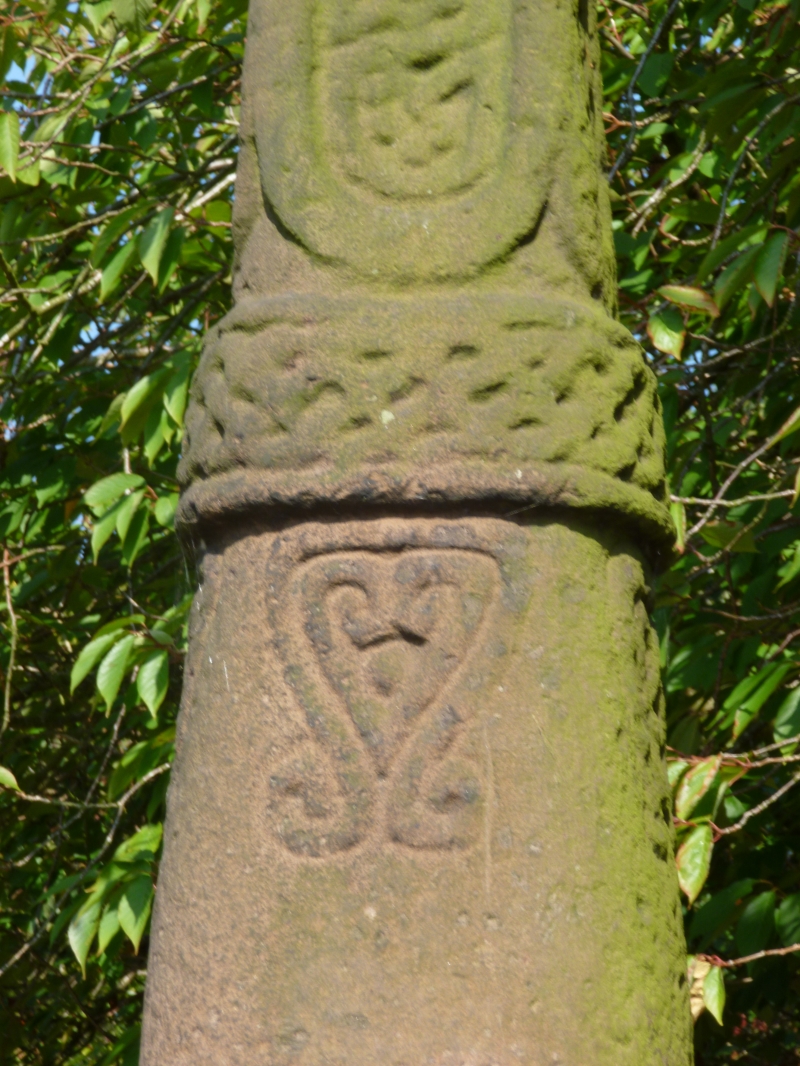 The monument is located 11m east of St Edward's Church and includes part of
an Anglo-Scandinavian cross which is Listed Grade II. It includes a
socket-stone, of modern date, and a shaft and part of the cross-head which
date from the early medieval period.
The socket-stone is roughly square in section and measures 1.1m north-south
and 1.4m east-west. Set into the socket-stone is a stone shaft of cylindrical
section at its base, tapering upwards to a 22cm wide collar or band, above
which the shaft continues to taper and is of rectangular section. Immediately
below the collar, the shaft is ornamented with pendants of scroll-work, whilst
the collar itself is decorated with a band of interlace. The upper part of the
shaft is divided into four panels which are decorated with scrolls, interlace
and fretwork. The top of the shaft narrows to form a distinct neck with
sloping shoulders; above this, it broadens to form a boss which represents the
remains of the cross-head. The full height of the cross is approximately 2.7m.
Approximately 25m south west of the cross are the standing remains of a second
early medieval cross which is the subject of a separate scheduling.
The paving and gravestones around the cross are excluded from the scheduling
although the ground beneath is included.

The cross located approximately 11m east of St Edward's Church is one of the
finest examples of an early medieval cylindrical-type cross in Staffordshire.
It provides important evidence for both the Scandinavian and Anglian forms of
ornamentation and is one of a small number of early medieval crosses in the
county that retain evidence for the form of the cross-head. The early medieval
cross-shaft has not been restored and its erection within the churchyard has
ensured the continued use of the cross as a public monument and amenity. The
survival of a second cross within the same churchyard enhances the interest of
this monument.