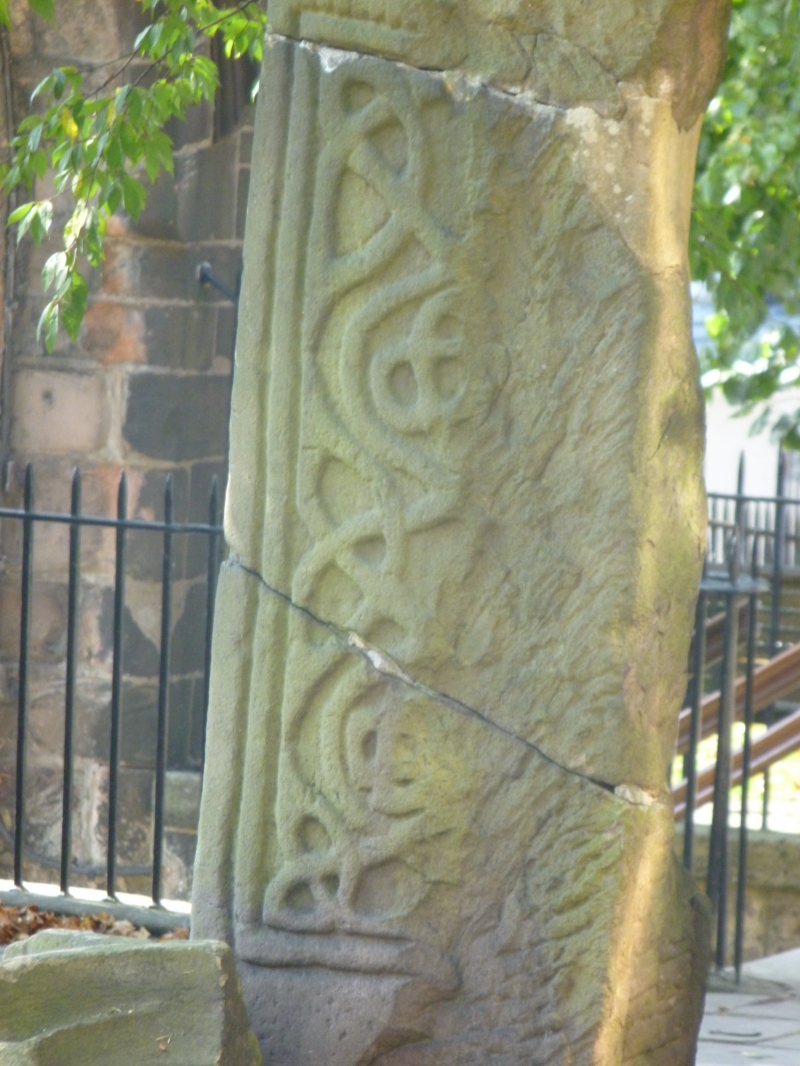 The monument includes part of an Anglo-Scandinavian cross situated within the
churchyard of St Edward's Church, 2m to the south of the church. The cross is
Listed Grade II and is early medieval and modern in date. The monument
includes a modern socket-stone and part of a shaft.
The shaft stands on a socket-stone which measures 1m square and is included in
the scheduling. Carved from a single block of Millstone Grit, the shaft is
rectangular in section and measures 0.45m north-south and 0.3m west-east at
its base. It stands to a height of 1.9m and has been repaired. The four sides
of the shaft are divided into panels of decoration containing simple
ornamental patterns, including interlaced plaitwork, a key pattern and
figure-of-eight knotwork. The central part of the western and northern sides
of the shaft have been cut away, but the decoration of the upper and lower
parts of these faces remains visible and provides evidence that the shaft was
originally taller.
Approximately 25m to the north east of the cross are the standing remains of a
second early medieval cross which is the subject of a separate scheduling.
The burial monument on the south east side of the cross and the gravestones
immediately surrounding the cross are excluded from the scheduling, although
the ground beneath the gravestones is included.

The cross to the south of St Edward's Church is a good example of an early
medieval cross. Situated in the churchyard, it provides a valuable insight
into the variability of form and decoration of these types of monument. While
part of the cross-shaft survives from early medieval times, subsequent
restoration illustrates the continued function of the cross as a public
monument and amenity. The survival of a second cross within the same
churchyard enhances the interest of the monument.

Books and journals
Jeavons, S A, 'Transactions of the Birmingham Archaeological Society' in Anglo-Saxon Cross-shafts in Staffordshire, , Vol. 66, (1946), 116