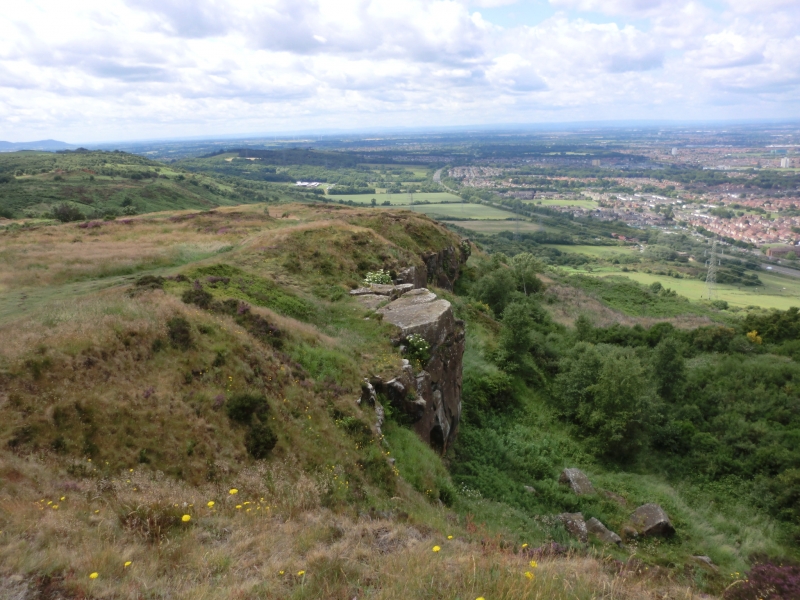 The monument includes a Late Bronze Age hillfort, a palisaded settlement, at
least one Bronze Age bowl barrow and a 19th century beacon, situated on a
steep, north facing scarp edge with extensive views in all directions. The
hillfort, semi-circular in shape, has maximum dimensions of 250m from
east-west and 120m from north-south within a defensive bank, ditch and
counterscarp bank. The defensive bank survives to a maximum height of 1m and
the ditch, from which the material to build the bank was quarried, varies in
width from 4-6 metres and is on average 1m deep. A break for the original
entrance appears on the south-eastern side. A counter-scarp bank, constructed
of surplus material quarried from the ditch, lies outside of the main
defences; it is up to 4m wide and survives to a height of 1m. Within the
defensive circuit there are several features relating to the use of the
hillfort, including at least one round house revealed by excavation. A stone
walled enclosure, set against the southern part of the bank is contemporary
with or later than the hillfort. Excavation has shown that the first activity
on the hilltop was in the Early Bronze Age. A low fragment of the mound of a
bowl barrow constructed during this period can be seen near the scarp edge.
Flint tools of broadly similar date were also found. The hilltop was first
enclosed by two phases of wooden palisade during the Late Bronze Age before
the construction of the more massive bank and ditch visible today. Although
the palisades are no longer visible at ground level, their foundation slots
survive as buried features. In the south-eastern section of the hillfort,
where a modern monument marks its position there are the remains of a square,
stone beacon. This is situated within a small quadrangular enclosure and is
believed to have been erected in the early 19th century when it served as a
beacon or lookout post during the Napoleonic wars. The Eston beacon monument
and the trig point are excluded from the scheduling, although the ground
beneath these features is included.

Eston Nab is the only surviving hillfort of any date in the county of
Cleveland; it is very well preserved and, although it has been subject to
partial excavation, the extent of disturbance is limited and its
archaeological deposits remain largely intact. Evidence relating to its
construction and to the complex history of the entire hilltop as well as the
nature and duration of its use will be preserved within the archaeological
deposits. Evidence relating to the Bronze Age environment around the monument
and of the wider landscape will also survive. The importance of this monument
is enhanced by the survival of contemporary settlements and funerary monuments
in the vicinity; such evidence provides a clear indication of the extent of
Bronze Age settlement and activity in the area and has the potential to
increase greatly our knowledge of Bronze Age society.