A Scheduled Monument in Callaly, Northumberland 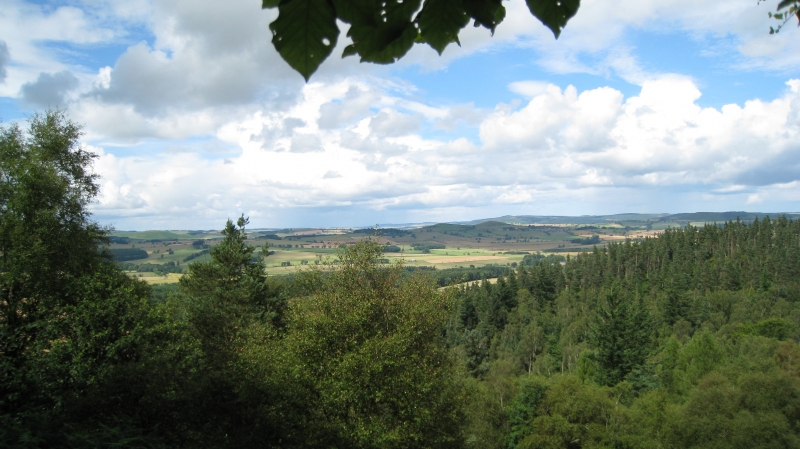 Church of England Parish: Whittingham and Edlingham with Bolton Chapel

The monument includes a hillfort of Iron Age date and a later medieval tower
situated on Castle Hill, commanding extensive views in all directions. The
irregularly shaped hillfort measures a total of 225m east to west by 115m
north to south and exhibits several phases of activity. The main enclosure on
the hilltop is roughly sub-rectangular in shape and is 80m east-west by 50m
north-south; it is surrounded on three sides by a rock cut ditch 12-17m wide
and 3m-7m deeper than the internal ground level. There is a counterscarp bank
4m wide which rises 2m-3m above the external ground level and an internal bank
3m wide and 0.8m high. The northern side of the enclosure is defended by a
strongly scarped bank. Two opposing entrances in the east and west sides are
carried on causeways across the ditch. Within the enclosure there are the
remains of two rectangular buildings in the north-west corner. They measure
15m by 13m and 15m by 8m. These are interpreted as the remains of Old Callaly
Castle known from documentary sources to have been held by Sir John Clavering
in 1415. The use of the term Old Callaly suggests that the later tower, around
which the present castle was built, was already standing in 1415 and that this
earlier tower on Castle Hill was retained as a place of defence or a lookout.
West of the main enclosure there are two contiguous annexes, the inner one
defended by a bank 7m wide giving access to the second defended by a bank 4m
wide. More than one period may be represented by the remains on Castle Hill
and the strong ditch may be a later medieval feature associated with the
medieval tower, this being constructed within the earlier defensive system. In
the late 19th century several Bronze Age stone coffins were discoverd during
quarrying on the north side of Castle Hill.

The hillfort on Castle Hill is exceptionally well preserved. Its situation and
the scale of its defences show that it was a settlement of some importance in
the region. It will contribute to our understanding of the range and nature of
prehistoric settlement in the area at this time. The good defensive nature of
the site led to its re-use during the medieval period; subsequently the
medieval tower was abandoned in favour of a new location at the foot and to
the west of the hill. Hence the site will retain significant and largely
undisturbed remains of this early medieval activity and will contribute to any
study of the development of the adjacent castle.