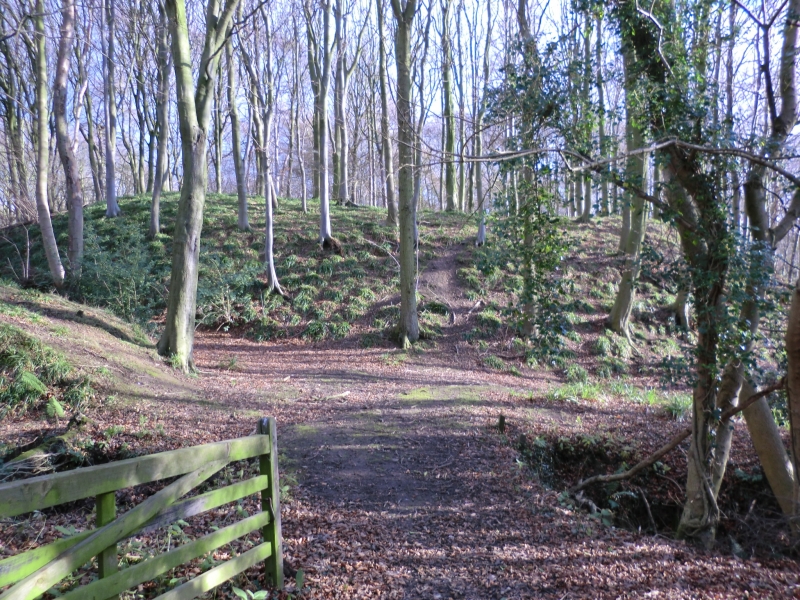 The monument includes a motte and bailey castle situated at the head of the
valley of the Sandsend Beck, overlooking its precipitous gorge from the north
side. The Barnby Beck, major tributary of the Sandsend Beck, issues over a
series of waterfalls from a slack, while a minor tributary flows in a steep-
sided gully along the western edge of the monument; because of its location
the castle has good natural defences on its south-western side. The motte is
an artificial mound, 50m in diameter at the base and surrounded by an 8m wide,
2m deep ditch. The mound is 4m high, the flat top being 40m in diameter and
partially surrounded by a 0.5m high rampart bank. There are various low
earthworks on the top of the mound, some of which will contain the foundations
of buildings such as the fortified tower which once stood on the motte while
other features are the result of a small-scale excavation reported to have
been carried out prior to 1817. To the north-east of the motte and running at
a tangent to it is a ditch which links the gully of the small stream to the
west with the edge of the precipice to the south; the ditch is 5m wide and
1.5m deep at its north-western end but becomes 10m wide and 3m deep at its
south-eastern end. The motte is flanked by two enclosures, or baileys. Of
these, the northern one is triangular, measuring 60m by 30m across, bounded by
the ditch on its north-eastern side and by the steep, 5m high scarp of the
east bank of the stream at the west. The southern bailey is larger, measuring
65m long by 40m wide, bounded by the ditch to the north-east and by the
precipice to the south and west.
The castle was founded in 1072 by Nigel Fossard and abandoned about 1200 when
Robert de Turnham built Old Mulgrave Castle, its stone successor, 700m to the
east.

Except for minor disturbance of the motte by early 19th century antiquarians
and recent afforestation, the motte and bailey at Foss Castle is well
preserved; the below-ground remains of medieval structures will survive on the
motte and within the baileys while the accumulated fill of the bailey ditch
and the buried landsurface beneath the motte will retain environmental
evidence relating to the landscape in which the castle was constructed.
Unusually, the 13th century successor to the Norman castle, Old Mulgrave
Castle, was constructed on a new site; because the archaeological remains at
Foss Castle have not been disturbed by later construction, the two monuments
considered together offer a relatively rare opportunity for studying the
development of medieval fortifications over time.