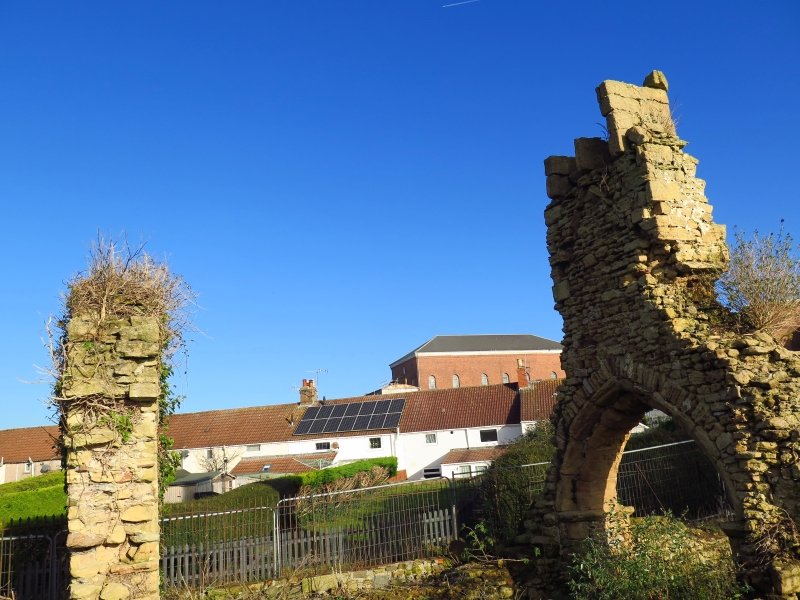 The monument comprises the remains of a multivallate hillfort, which probably dates to the Iron Age period (c. 800 BC - AD 74, the Roman conquest of Wales), and a ruined medieval Holy Trinity Church. The fort is located on the shore of the Bristol channel with its southern boundary formed by a small sea cliff, and multiple ramparts to the N, E and W. The inner rampart if the largest, standing around 6m high, it forms an arc enclosing the fort interior, which is level and now used as a football pitch. On the NE side of the fort the outer ramparts have been destroyed by housing, but on the NW side there are two further banks separated by ditches, with an outer ditch that now lies largely under the line of the fence surrounding the adjacent paper mill. The outer of these two banks is the highest, around 2.5m maximum, with the middle bank a maximum of around 1m in height. The ditches are around 3m wide and up to 0.8m deep. The entrance to the fort is on the NE side. The site was investigated by Nash-Williams in the 1930s, who discovered the remains of the NE ramparts with V-shaped ditches between. He also identified that the main inner rampart had been built in four phases and had revetment walls on the inner edge. Inside the bank on the NW side he also identified quarry ditches. Finds from the site indicate that it was occupied from the 2nd century BC to the 2nd century AD, and provide tentayive evidence that the Roman army held the fort at around AD 50, presumably to guard the strategic crossing of the river Severn.

The remains of the church consist of the lower walls of a nave, chancel and added south porch, all of large, well dressed blocks of local Sudbrook Triassic Sandstone. The highest upstanding elements are the west wall of the nave with a fine a trefoil lancet of the later 13th or 14th century, a pointed chancel arch of c1200 with a twin belfry above, much of the latter having fallen in a fire of 2016. The side walls and simple late medieval outer arch of the porch also stand higher. The whole of the interior and external ground levels have been raised by dumping and landscaping to up to 1m above the medieval surfaces, the seats of the stone porch benches now being level with the ground. Holy Trinity served the medieval hamlet or village of Sudbrook and is recorded as still being in use in 1560 but was 'decayed' by 1755 by which time it had become a chapelry of Portskewett and stood quite alone when depicted on the Tithe map. Early 19th century drawings show it in ruins but retaining distinctive round headed nave windows of 12th century character but now lost.

The hillfort is of national importance for its potential to enhance our knowledge of later prehistoric defensive organisation and settlement. The site forms an important element within the wider later prehistoric context and within the surrounding landscape. The site is well preserved and retains considerable archaeological potential. There is a strong probability of the presence of evidence relating to chronology, building techniques and functional detail including potential military re-use of the site in the Roman period and occupation associated with the former medieval settlement.

The church is of national importance for its potential to enhance our knowledge of medieval ecclesiastical architecture and religious funerary and ritual practices. The upstanding masonry retains a number of distinctive architectural details of several periods and whilst ruinous have escaped alteration in the 19th and 20th centuries. Trial excavations in the 1990s demonstrated that it retains considerable archaeological potential with buried structural remains and associated deposits relating to its chronology, layout, building techniques, functional detail and associated burials.The site forms an important element within the wider medieval landscape and shares group value with a series of other small Norman churches in south-eastern Monmouthshire (St Pierre, Runston, Undy, Portskewett, Penterry).