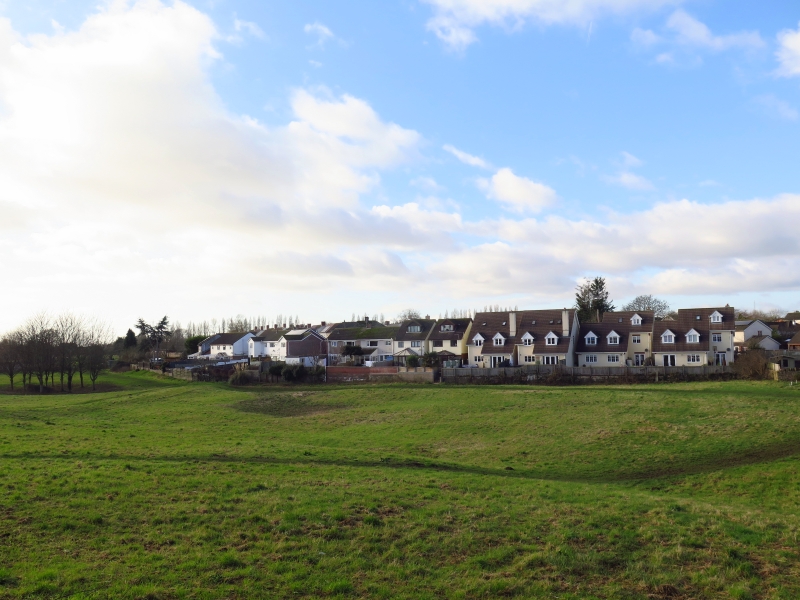 The monument comprises the remains of a medieval manor house. The site consists of a series of upstanding earthworks traditionally thought to be the site of a hunting lodge belonging to Harold Godwinson, later King Harold II of England, which is described in the Anglo Saxon Chronicle. The chronicle states that the lodge was destroyed before it was even completed, by Caradog ap Gruffydd on the feast of St Bartholomew (24th August) 1065. Caradog’s attack also involved the massacre of many of Harold’s people. Occupation of the site continued after the attack and it eventually fell under Normal control, with the Domesday Book recording the site as one of three hardwicks (dairy farms) belonging to Chepstow Castle. In 1270 the manor is recorded as in the ownership of the Deneband family who hold it until the fifteenth century, after which it is abandoned and eventually demolished.

The site is located on a slight spur immediately W of St Mary’s Church. The earthworks comprise a sub-rectangular or oval platform 21m-22.5m in diameter and 1m high, with a bank defining part of a possible enclosure measuring 55m E/W by 25m N/S. Within the centre of the platform are a series of roughly N/S aligned linear earthworks which appear to be the remains of walls from a stone building. On the western slope of the raised mound is an E/W orientated bank 50m long by 15m wide and 1m high, forming a dam or causeway. The area crossed by the dam forms part of an old stream channel, now silted up, which may have formed a tidal inlet that was navigable from the Severn Estuary.

In 2007, an evaluation of the site was carried out by Time Team, the aim of which was to reveal more about the history of the site and establish whether any evidence for the pre-Norman hunting lodge could be found. While the evaluation did find tentative evidence for 11th century activity on the site, no evidence for Harold’s hunting lodge was identified, and all the finds were post-conquest in date. Two buildings were revealed on the site, one a possible animal shelter and the second a much more substantial structure that has been interpreted as a possible tower house. This larger structure measures approximately 25m by 20m and had thick stone walls. Both of these structures are thought to be part of a manorial complex belonging to the Deneband family.

The monument is of national importance for its potential to enhance our knowledge of medieval secular architecture. The monument is a well-preserved example of its type and forms an important element within the wider medieval context. The structure itself may be expected to contain archaeological information in regard to chronology, building techniques and functional detail.