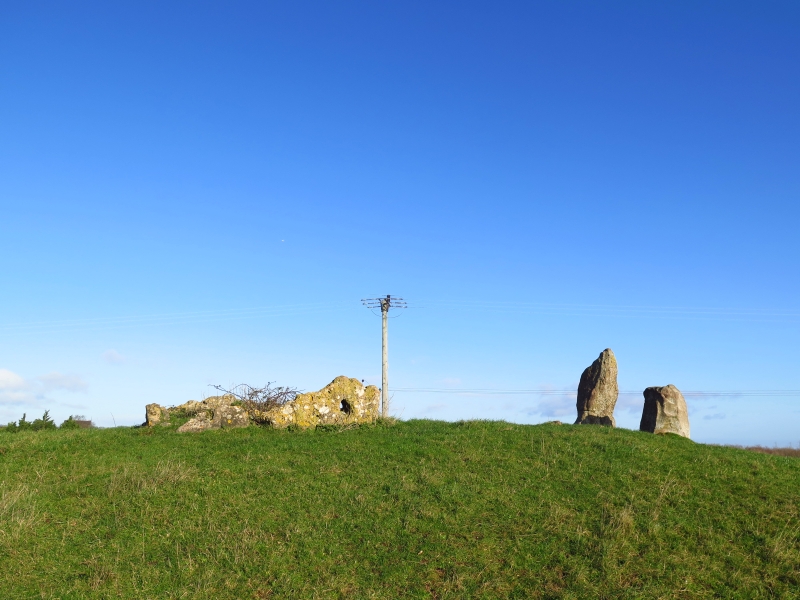 The monument consists of the remains of a long barrow. A long barrow is a rectangular or trapezoidal earthen mound of Neolithic date (c. 4000-2800 BC), usually accompanied by flanking or encircling ditches, and normally associated with human remains. Mound construction and associated features vary considerably in type and complexity.

The long barrow is situated on the summit of a small knoll in the middle of a pasture field. The knoll has a steep scarp to the north and slopes more gently on the other sides. On top of this, aligned WNW-ESE is the long barrow. The north side slopes steeply, and is 2.2m high, the south side less steeply and is 1.8m high. It is c. 20m long. In the middle, on the summit, is a rectangular alignment of stones. At the east end are two uprights. That to the north is of conglomerate, and is c. 1.6m high, 0.5m wide, and 0.6m across, tapering at the top. That to the south is of sandstone, and is c. 0.7m high and roughly triangular in section, each side being 0.7m wide. About 4m to the west is a small chamber enclosed by stones 0.3-0.7m high, lying flat. The east end is open. There is a large stone on the south side with a hole right through it, and another on the north side with a hole almost through it. There are two stones along the south side, two enclosing the west side and four along the north side.

The monument is of national importance for its potential to enhance our knowledge of prehistoric burial and ritual. The monument is an important relic of a prehistoric funerary and ritual landscape and retains significant archaeological potential, with a strong probability of the presence of both intact burial or ritual deposits and environmental and structural evidence, including a buried prehistoric land surface. Long barrows may be part of a larger cluster of monuments and their importance can further enhanced by their group value.