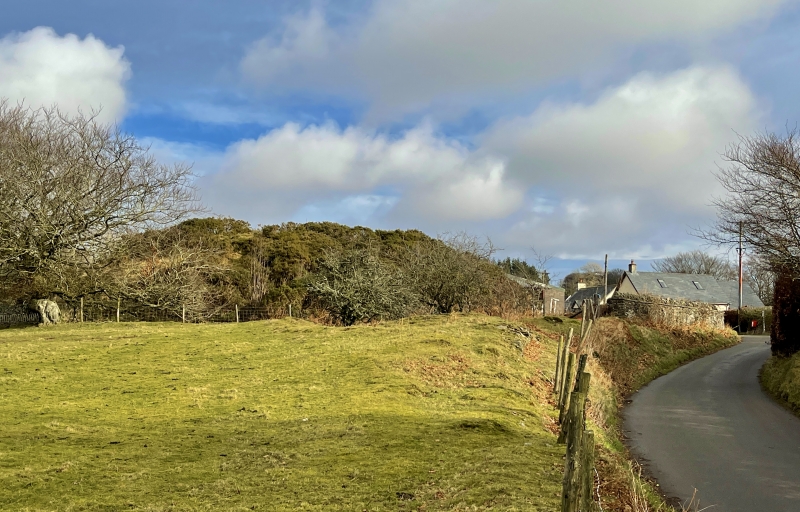 The monument comprises the remains of a motte and ditch, dating to the medieval period (c. 1066 -1540 AD). It consists of a steep-sided mound some 35m in diameter at its base with a flat summit 17m across occupying a ridge top location high above the eastern flank of the Ebbw with wide views in all directions but the E. On the S side the mound is 3.5m high with a ditch or quarry hole, 2m wide and 1.5m deep, towards the W end. The W side is 5m high and very steep. At its base is a flat-bottomed ditch 4m wide and 1m deep which stops halfway along the N side. On the NE side there is a hollow 8m long and 0.6m deep. A retaining wall has been built along the base of the motte on the E side. A path leads up the mound from the N side to the summit. It is located immediately to the east of the medieval, possible pre-Conquest church of St Illtyd, which may have lain within any former bailey. Beyond this are the buried footings of the massive 13th or 14th century towers of Castell Taliorum, the relationship between motte, church and castle being uncertain. it is unclear whether the motte represents a castle of the Welsh lords of Gwynllwg or a relic of the Norman invasion of the area.

The monument is of national importance for its potential to enhance our knowledge of medieval timber castles and the Norman invasion of the south-Wales uplands. It is well-preserved and an important relic of the medieval landscape and shares group value with the adjacent church and later masonry castle site, the ambiguous relationship between early ecclesiastical and successive secular sites reflecting that at nearby Mynyddislwyn (MM035. It forms one of a series of undocumented and similarly located early castles across the uplands of the former Welsh lands of Gwynllwg and Senghenydd that could equally be interpreted as Norman or Welsh. It retains significant archaeological potential, with a strong probability of the presence of both structural evidence and intact associated deposits.