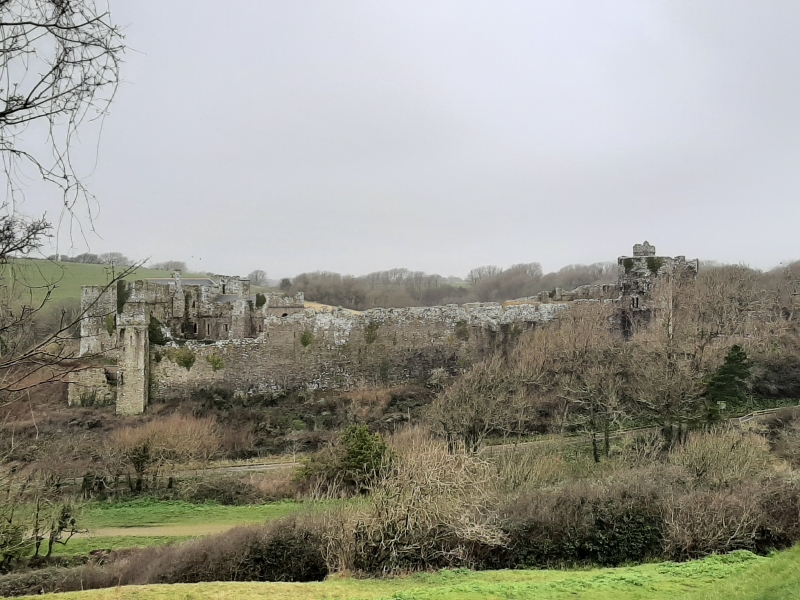 The monument consists of the remains of a castle, dating to the medieval period and which is located about 800m from the sea on a low spur dividing a deep valley above the confluence of two streams. The castle is first mentioned, and is famous as the birthplace of, in 1147 Giraldus Cambrensis who accompanied Archbishop Baldwin recruiting for the Third Crusade around Wales in 1188. Giraldus was the fourth son of William de Barri from a family which held estates principally in Ireland. Manorbier passed down the family line until the 14th century and had a peaceful history apart from one internal family dispute in 1327. After a succession of subsequent occupiers in 1475 it became crown property, by 1630 had been disposed of to the Phillips of Picton Castle and in 1645 the castle was taken for Parliament during the Civil War. In the 17th and 18th centuries a number of agricultural buildings were constructed within it and in 1880 when the castle was under lease a house was built within the inner ward and other parts restored to habitable use. The castle retains substantial stone buildings erected before 1200 though most are the result of rebuilding in the thirteenth and early fourteenth centuries, some remains dating to refortification for the civil war are also present. The remains consist of an inner ward, about 76m by 44m, an outer ward, about 100m by 76m together with an area that encompasses some of the associated park, grounds and gardens. The inner ward is surrounded by a curtain wall with a gatehouse in the east wall. At the north-east and south-east corners are two towers, the north tower and the round tower. There is a spur tower at the south-western corner and a turret roughly mid-way along the northern curtain wall. A range of domestic buildings, including a hall block, kitchens and a chapel, formerly abutted the southern, western and north-western curtain walls. Some of these have been replaced by modern buildings. The hall block and the chapel survive. The outer ward is located to the east of the inner and separated by a defensive ditch protected to north and south by short wing walls and was surrounded a less substantial curtain; most that now survives is on the north side. This includes the ground-level remains of a small rectangular tower to the north and a half round turret on the north east. Within the outer ward are the remains of a large later medieval barn. Extending northwards from the castle wards are two long lengths of wing wall, one at the west end of the hall block and the other from the flanking wall of the outer ward, these descend down slope to where they terminate at what was the location of the pond for a mill south east of the castle.