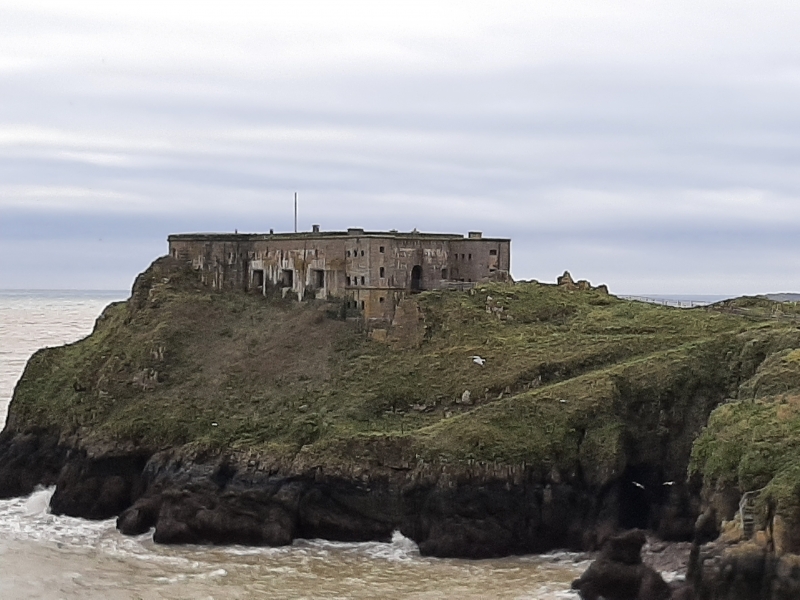 Fort St Catherine was constructed in 1868-70 and is prominently sited on the rocky St. Catherine's Island just offshore from Tenby. It is built on the site of a medieval chapel. The fort belongs to the system of fortifications added to improve the defences of Milford Haven and the Pembroke Naval Dockyard following the report of a Parliamentary Committee on these sea defences published in 1858. It was the only fortification built outside the Haven but its design consists of elements to be found in the other forts of this period.

The fort was originally approached by a wooden bridge across the sands, but is now reached by a flight of rock cut steps from the beach. As the track approaches the fort it swings left and is carried on a revetment wall which forms the outside of the rock cut ditch which divides the island. Some original iron railings survive. Access to the fort is across the remains of the original drawbridge with its chains attached, resting on wooden cross-trees. The entrance façade is symmetrical and in rock faced ashler limestone. There is a semi-circular arched doorway with original door and iron grille which has a bold surround with verniculated quoins. Above is a date plaque reading V1870R and a corbel table and rolled bank below the parapet. The ends project forward and have three rifle loops in each of the three storeys to give covering along the ditch and windows with diamond leaded glazing to the front. The rectangular openings to the three main casemates down the north and south side are dressed in Lundy granite, whilst the eastern end shows three semi-circular projections carrying out the open battery above.

The interior is on three levels. The basement consists of a number of bomb-proof chambers vaulted in brick. The main level houses the six casemates either side of a central corridor. These are D-shaped with conical brick vaults linked by vaulted corridors. These retain many of the fittings from the time the fort was converted into a house in the 1920's and occupied until the early 1940's. There are partition walls, doors, windows and fireplaces inserted and the flooring covers the original gun races and fixings. Beyond the casemates are brick-vaulted tunnels to the magazines and access to three rifle loops giving enfilading fire along the face of the casemates.

The roof level consists of three gun emplacements en barbette at the eastern end with one having its original cannon pivots in place. Behind are brick-vaulted tunnels to the expense magazines where the shell hoists survives. Above the casemates is a flat well with chimneys venting the casemates below. Around the parapet is a slate fighting platform.

The monument is of national importance for its potential to enhance our knowledge of 19th century military organisation. The monument forms an important element within the wider context of the military occupation of Wales and the structures may contain well preserved archaeological evidence concerning chronology, layout and building techniques.