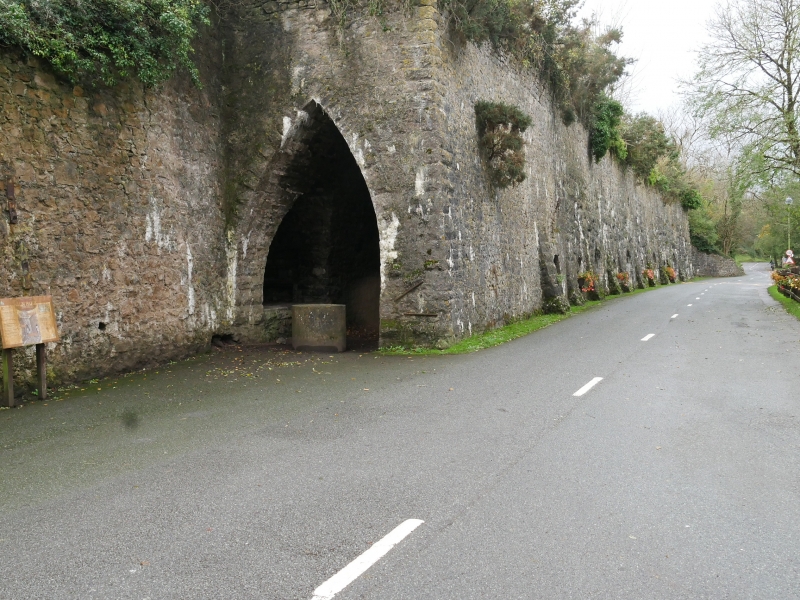 The monument consists of the remains of two banks of six very large draw limekilns set below the Northern edge of the Blackrock Limestone Quarry which they serviced and which date to about 1860, when they were provided with a rail link to the newly constructed Pembroke and Tenby Railway, to import the coal and export the lime. One kiln remained in operation until the 1940’s.

Both banks measure c 15m high. The western bank of kilns is the more elaborate and consists of a massive, slightly concave facade of large, rock faced ashlar limestone. It is symmetrical and of 11 bays, divided by raking buttresses. The end bays are blank and between there are alternating semi-circular arched window and door openings. The upper parts of the facade are in coursed rubble, which may imply a rebuilding, and there is a line of weepholes. Behind the facade is a passage, running the length of the building and rising to a steeply pointed arched, barrel vault which formerly contained a railway track. This served a line of 12 stoking chambers, 2.2m wide, 3m deep and 2.8m high. These have pointed arched entrances whose floors are raised above the level of the railway track. Each pair of chambers serves one kiln, marked by rectangular openings with large metal firebars. Between each pair of chambers is a semi-circular arched opening under what rises to carry the charging platform. The fireboxes are blocked and the arched openings have later supporting piers. Out of each kiln projects the remains of a metal chute, pointing into the railway passage. To the east and west of these kilns are stone revetment walls, the eastern supporting an incline up to the top of the kilns.

The eastern bank of kilns has a massive convex facade of rock forced ashlar limestone. This has raking sides and rounded corners and has a line of five pointed arched openings, 2.5m wide, 4m deep and 3m high to the stoking chambers. The rear of the chambers is formed by the limestone bedrock. Inside are semi-circular arched stokeholes with metal firebars, the crucibles are lined by square limestone sets. The end walls also have pointed arched openings.

The monument is of national importance for its potential to enhance our knowledge of industrial manufacturing processes. It retains significant archaeological potential, with a strong probability of the presence of associated archaeological features and deposits. The structure itself may be expected to contain archaeological information concerning chronology and building techniques. A lime kiln may be part of a larger cluster of monuments and their importance can further enhanced by their group value.